WPX Energy (NYSE:WPX) was quietly one of the best-performing stocks on the market last year. The oil and gas producer went on an epic run, which saw its stock more than double over the course of the year: 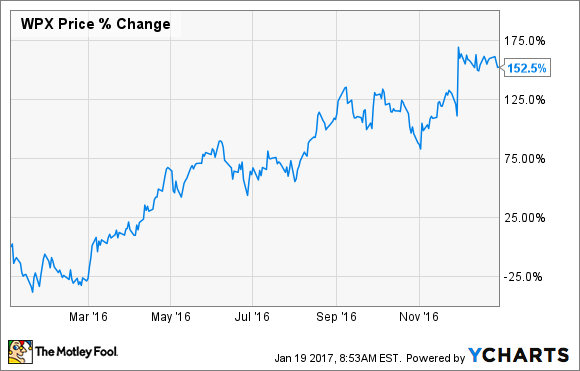 While rising oil prices helped ignite that rally, the primary driver was the completion of a two-year transformation that saw the company reshape its balance sheet and portfolio. These changes positioned WPX Energy to thrive with lower oil prices. Because of that, its stock could still have plenty of growth ahead of it as the oil market improves and the company delivers on its ambitious oil growth program.

WPX Energy's priority as it entered 2016 was to continue reducing debt, which stood at $3.2 billion at the end of 2015. The company took a variety of actions to achieve that goal last year, including selling non-core assets and using that cash to repurchase bonds on the open market at a discount and launching a tender offer to buy debt back early. These moves reduced long-term debt to $2.6 billion by the end of the third quarter and bolstered the company's cash position from $38 million to $623 million over the first nine months of the year. That money, plus an untouched $1.025 billion credit facility, provides WPX with ample liquidity to fund its growth plan.

The the other central focus of WPX Energy last year was to continue testing and developing its position in the Delaware Basin portion of the Permian Basin. The company initially entered the Basin in late 2015 and bolstered its position last year by adding another 12,300 net acres, which boosted its holdings up to 102,000 net acres. Aside from that deal, the company spent most of the last year testing its acreage, which resulted in the identification of 5,500 drillable locations across 13 prospective oil and gas intervals. The company also started ramping up its development work, which steadily increased production, with output in the third quarter, for example, up 9% sequentially. Further, the company started building out a crude oil gathering system, which should enter service this year and help it accelerate production growth over the next few years.

What does the future hold for WPX Energy?

WPX Energy completed its transformation in the third quarter when it unveiled a new four-year oil growth strategy. The plan is to deliver 20% to 35% compound annual oil and EBITDAX growth over the next four years. Further, the company intends to fund this growth with internally generated cash flow and cash on hand. If everything goes according to plan, the company will double its oil production over the next two years while at the same time pushing its leverage ratio down to 2.0-2.5 times net debt-to-EBITDAX by the end of next year.

For 2017, WPX Energy initially anticipated spending $800 million to $860 million on capex. That would have been enough capital to increase oil output by 25% from a base of 40,000 barrels of oil per day while companywide production was expected to rise 8% from a base of 84,500 barrels of oil equivalent per day (BOE/d). However, in early January the company announced a $775 million deal to boost its acreage position in the Delaware Basin up to 120,000 net acres. That deal will accelerate the company's growth trajectory, with it now targeting 30% oil growth this year along with 25% companywide output growth.

That transaction shows just how quickly Permian Basin producers can accelerate their growth plans. An even more dramatic example is Diamondback Energy (NASDAQ:FANG), which initially expected to grow companywide production 30% in 2017, from a base of 41,000 BOE/d. However, Diamondback Energy has since boosted that growth rate to 60% after agreeing to acquire Brigham Resources in a $2.43 billion deal, which significantly increased its acreage position in the Delaware Basin. Meanwhile, RSP Permian (NYSE: RSPP) sees its production rocketing an astounding 86% this year, though that is off a much lower base of 29,000 BOE/d. Fueling RSP Permian's growth is a similar game-changing acquisition where it paid $2.4 billion for Silver Hill. Interestingly enough, RSP Permian outbid Diamondback Energy for Silver Hill, which shows just how competitive buyers are these days as they seek to lock up more land in the region.

Given the sheer volume of merger and acquisition activity in the Permian Basin right now, it would not be a surprise to see WPX Energy make another deal to bolster its acreage position and growth prospects before the year is over. With a premium-priced stock and a strengthening balance sheet, the company certainly has the capital resources to continue its Permian Basin buying binge. If it can find a needle-moving deal at a fair price, it could ignite another rally.

WPX Energy went on an incredible run last year, fueled by the completion of its transformation plan and rising oil prices. That said, the company is just getting started on a new four-year growth plan, which could fuel more gains, especially since it can use its rising stock price to accelerate that strategy. Because of that, this stock could have more room to run as long as oil prices cooperate.