In 2010 and 2011, microprocessor giant Intel (NASDAQ:INTC) enjoyed two record years in a row -- its revenue and profits surged to new heights as its core personal computer and data center microprocessor business boomed.

Things got tougher for the chipmaker in the following years, though. Steep declines in the personal computer market were only partially offset by increases in data center and other chip sales, leading to a couple of years of revenue declines.

In 2015, though, Intel's personal computer business slumped again, believed to be due in part to a "hangover" from the 2014 personal computer upgrade cycle. Its data center business, too, underperformed the company's expectations, coming off an excellent 2014. All of this drove a modest reduction in revenue year over year.

In 2016, Intel is expected to have delivered a modest amount of revenue growth, fueled by stable personal computer chip revenues, data center growth (albeit lower than expected), Internet of Things growth, and the addition of the Altera business to the company's financials.

With 2016 in the rearview mirror, it's worth asking a simple question: Will 2017 be Intel's best year yet?

Revenue and earnings per share look to be records

Current analyst consensus calls for Intel to deliver revenue growth of 3.6%. Such growth, modest as it is from a percentage perspective, would translate into the highest annual revenue Intel has ever generated.

Indeed, Intel is expected to generate record revenue in 2016, so any growth from that baseline would mean another record revenue year for the company.

Consensus estimates also call for $2.82 per share in earnings in 2017, up about 5.6% from the levels expected for 2016. If the company hits that earnings-per-share figure, this would -- again -- be a record, since it will be growth from the 2016 figures, themselves records.

How about operating profit and net income?

Although analysts seem to think Intel is on track to post record revenues and earnings per share in 2017, it's important to note that Intel has bought back a lot of stock over the last several years. 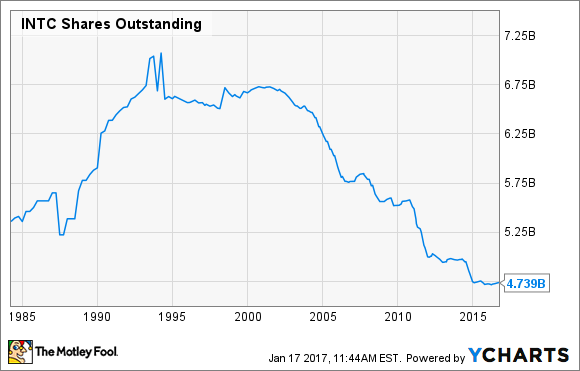 Share repurchases reduce the number of shares that a company has outstanding, and if share count is sufficiently reduced over the years, a company can achieve record earnings per share without necessarily achieving record operating profit or net income as there are fewer shares to divide it among.

One-time charges and tax rates affect net income, potentially obscuring the underlying business performance. Thus, while it's worth looking at that figure, operating profit is one of my favorite ways of assessing a business's ability to deliver value.

Current analyst consensus calls for Intel to generate about $17.64 billion in operating profit during 2017, up from an expected $16.31 billion in 2016.

Intel's best operating profit performance to date was achieved in 2011, when the company generated a whopping $17.5 billion in operating profit. Since then, Intel's operating profit has declined as it has boosted its operating expenses (growing research and development substantially over the years) while revenue has remained flattish. 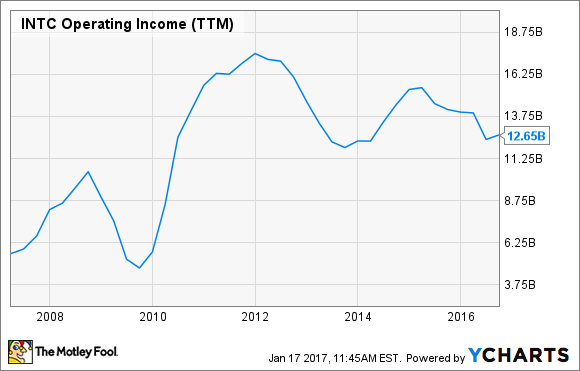 If Intel achieves what analysts expect it to in 2017, then -- after many years -- the company will finally be able to claim record annual operating profits again.

Current analyst estimates are basically just educated guesses -- but guesses, nonetheless. On Jan. 26, Intel is expected to provide financial guidance for 2017, which should include expectations around revenue, operating expenses, and gross profit margins. In other words, enough data to calculate a range of potential operating profit/net income outcomes.

Intel's figures will also be "guesses" (Intel has revised its quarterly and full-year guidance numbers both upward and downward as prior years have progressed), but investors generally take company financial guidance seriously.

If Intel's guidance implies revenue/operating profit that's significantly higher than what analysts are expecting, I'd expect the stock to rally. If the guidance is in line, I'd expect no real movement in the stock. And, of course, if the guidance is significantly worse than expected, I'd fully expect a drop in the stock price. And investors will have a better idea about 2017's chances of being Intel's best year yet.

Will 2017 Be Intel Corporation’s Best Year Yet? @themotleyfool #stocks $INTC Next Article
Current