It would be an understatement to call 2016 a good year for Teck Resources Limited's (NYSE:TECK) investors. A 418% gain is simply incredible. It almost makes the huge 150% (or so) price advance Natural Resource Partners L.P. (NYSE:NRP) investors witnessed look small by comparison. Investors should enjoy those gains, though, because it looks unlikely that 2017 will be as robust since the unique coal price spike behind these price jumps appears destined to cool off.

One of the big drivers for this pair in 2016 was a massive run-up in the price of metallurgical coal. To give you an idea of how massive the price move was, Teck Resources' average realized price for steelmaking coal was $75 per ton in the first quarter. By the third quarter it was $92 per ton, representing a mixture of contract prices set in June and spot prices. The spot price for coal in the third quarter, meanwhile, was over $200 per ton. And spot prices moved even higher at the start of the fourth quarter. 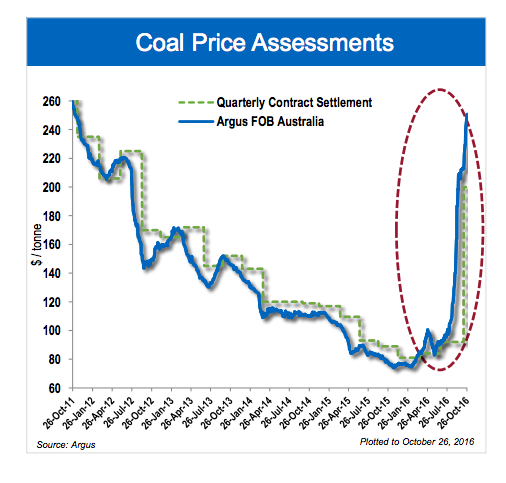 That was a huge tailwind for the shares of Teck and Natural Resource Partners, both of which rely on steelmaking coal for a big piece of their businesses. But you have to take the met coal rally with a grain of salt. Teck, for example, warned in its third-quarter release, "We are encouraged by the improved commodity price environment, but remain cautious about how long the supply/demand imbalance will last."

According to Natural Resource Partners, met coal's price run-up was "due to supply shortages caused by China's recent production cutbacks, operational disruptions in Australia, and the significant number of mine closures in the United States." Teck added, "The ability of suppliers to increase production to respond to demand is being hampered by the prolonged period of low pricing which resulted in cancelled or delayed projects and the shutdown or bankruptcy of a number of mines." Demand was so high in the third quarter that Natural Resource Partners was actually able to shift some of its higher-quality thermal coal, used in power plants, to the met market.

But Teck's earlier warning about the sustainability of met prices is likely to prove prescient, as met coal prices began to fall toward the end of the year. Indeed, while unique circumstances are "hampering" the ability of met coal miners to meet demand, given enough time, and financial incentive, those obstacles will be overcome. Investors who rushed into this pair of miners on the hopes of ever-rising coal prices will probably end up disappointed. 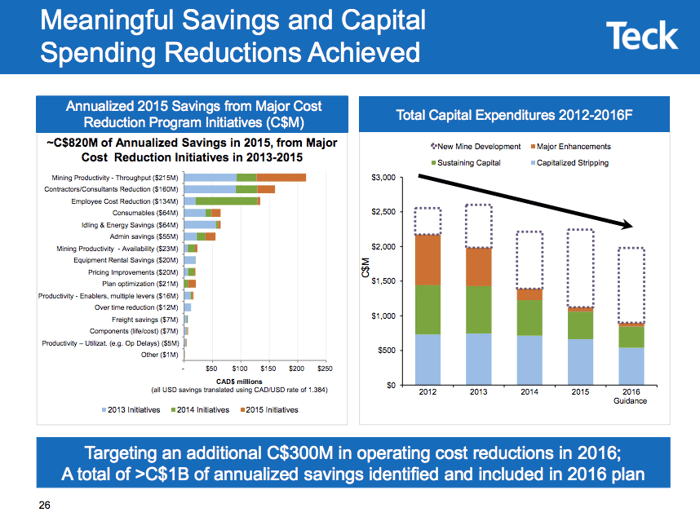 Teck has been cutting costs in a big way. Image source: Teck Resources.

That said, it would be unfair to suggest that all of the price gain was because of met coal. Teck, for example, has made huge strides cutting costs and, on its balance sheet, pushing maturities out and proving that it can afford a major investment in the Canadian oil sands. That oil sands investment will add a fourth commodity to its portfolio, broadening its reach beyond met coal, copper, and zinc.

Copper and zinc, meanwhile, had their own runs in 2016, helping the diversified miner's top- and bottom-line results. So there were a lot of moving parts behind that 400% gain, many of which aren't going to go away simply because coal prices (or the prices of copper and zinc) start to fade.

The same is true of Natural Resource Partners, which gets royalties from met coal, thermal coal, soda ash, and an assortment of industrial aggregates. Although met coal was the big driver of investor enthusiasm, soda ash and aggregates remained a solid foundation for the company last year.

A drop in met coal prices won't change that underlying strength. And, if you step back from coal, an uptick in oil and gas drilling because of stabilizing energy prices would boost demand at Natural Resource's aggregates operations. So would increased construction spending if the economy picks up steam, as many hope it will under President Trump. Overall, there are positives to look for in 2017, even if met coal prices normalize.

Investors often get caught up in exciting news. And the massive price run in the met coal market was pretty exciting. The problem is that the exponential advance looks unsustainable. If that proves true, as I suspect it will, then short-term investors could exit the shares of this duo just as fast as they jumped aboard. That will likely make 2017 a much less rewarding year for Teck and Natural Resource Partners investors.

However, those with a long-term focus shouldn't let that overshadow the real progress each made in 2016. Or the fact that these companies offer a far more diverse lineup of commodities than just met coal. In fact, it might be better to focus on what Teck and Natural Resource Partners do in 2017 with what looks like a windfall gain from 2016. Just don't go into the year expecting another 100%-plus price gain.