Shares of Spam-maker Hormel Foods Corporation (NYSE:HRL) took a hit in 2016, falling 12% according to data from S&P Global Market Intelligence. It was a volatile year for the stock as earnings growth was strong despite the stock slide. Multiple compression seemed to be the culprit. The chart below tells the story. 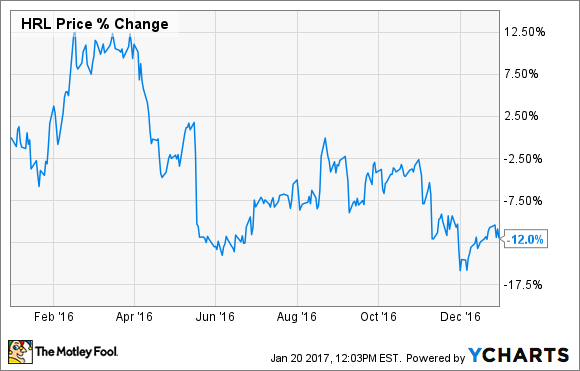 Hormel shares actually gained through the first few months of the year as the stock rose 7% on February 16 after the company reported first-quarter earnings, beating estimates handily, and it also raised its EPS guidance for 2016 from $1.43-$1.48 to $1.50-$1.56.

The stock started fading in the beginning of April, though, and the it plummeted after the company reported second-quarter earnings in May, even though the company beat earnings estimates again and raised its guidance. Hormel also announced it would acquire Justin's nut butter brand as it makes a further attempt to diversify away from conventional packaged foods. The purchase was for an undisclosed amount and follows 2015's acquisition of Applegate deli products for $775 million.

The stock traded relatively flat over the subsequent months, but it dipped again following the election, which saw defensive, dividend-paying stocks fall out of favor as investors moved into cyclicals and financials as excitement for infrastructure spending built.

Hormel's performance last year may have been a case of multiple compression as much as anything else. The stock began the year with a P/E ratio of over 30, where it was overheated, and ended it near 20 as the market's mood shifted to cyclical stocks. Now that the valuation has cooled off, 2017 should be better for the stock. The company seems to be making smart acquisitions, and it's a reliably stable dividend aristocrat.