Sometimes in marketing, repetition becomes reality. Papa John's (NASDAQ:PZZA) keeps saying "Better Ingredients, Better Pizza" in its commercials and the United States (and other parts of the world) seem to be buying it.

It does not matter that nearly any U.S. city has at least one, but probably a few local pizza places which offer a better pie. People buy into the Papa John's marketing and seem to genuinely like its pizza or at least appreciate its ubiquity and convenient delivery. 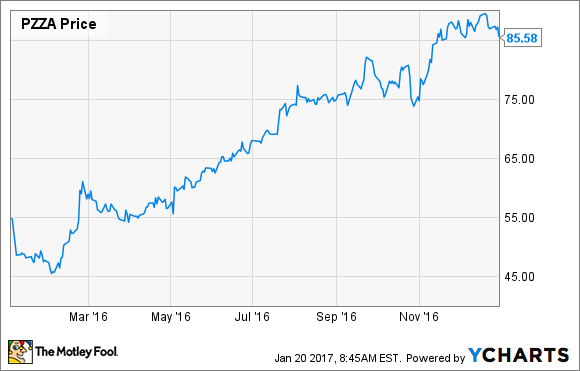 Those increases are made more impressive by the negative climate for restaurants in general in 2016. And while the numbers were not especially large, they were enough to send the company shares soaring. Papa John's began 2016 at $54.97 and closed it at $85.58, a 55% gain according to data from S&P Global Market Intelligence.

Operating in a crowded niche in a very difficult climate for any restaurant chain Papa John's moved steadily forward. In Q3 for example it had comparable-stores sales growth of 5.5% for North America and 7.6% for International. It also had 36 net global openings in the quarter.

Papa John's plans to keep growing and its CEO John Schnatter believes it has the right plan moving forward. He also noted that it won't just be pizza pushing the company ahead.

"With continued enhancements to our digital platforms, expansion of our international footprint, and the introduction of our new pan pizza, 2016 is shaping up to be another outstanding year for Papa John's," he said.

For Papa John's, like its rivals Domino's, and to a lesser extent Pizza Hut, there does not seem to be a limit to the number of people who prize convenience first when it comes to pizza. As long as that market exists -- and it's possible that higher-end fast casual chain could cut into it -- Papa John's should continue to grow.

It's a recipe where digital ordering platforms may be more important than sauce or pepperoni, but it's a formula that works. Papa John's has made the pizza procurement process easy and it has a good enough product that people keep coming back.