If you're like most individual investors, you'd be glad to park your money into investments, after doing solid due diligence, and monitor them as little as possible. You can probably think of many things you'd rather be doing in your free time than frequently monitoring your stocks.

Moreover, studies show that the most successful investors are generally those who buy and hold for the long term. Monitoring stocks and the market too frequently can lead many folks to make rash trading decisions. Legendary investor Warren Buffett epitomizes the buy-and-hold philosophy, as he's been quoted as saying that his favorite holding time is "forever."

The key to success using a buy-and-hold strategy, of course, is good stock selection. There aren't many stocks that fall into the "set and forget" category. Society rapidly changes due to technological advances and other factors. Many of today's successful companies will be tomorrow's struggling companies -- if they're even still in business. This is particularly true in the tech arena.

Two companies that have stood the test of time and should continue to do so for generations to come, while continuing to outperform the market over the long term, are American Water Works (NYSE:AWK) and Walt Disney (NYSE:DIS) 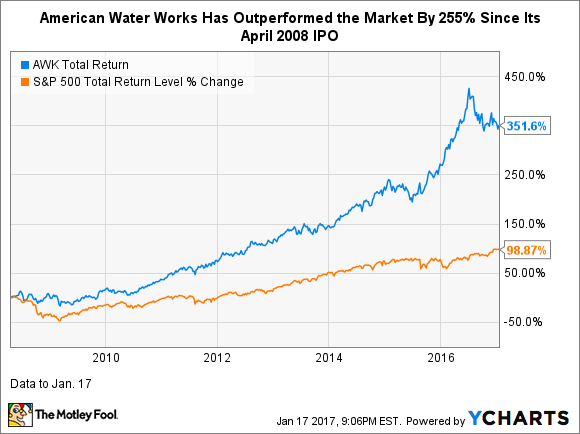 I can't think of a more quintessential buy-and-hold-forever stock than America Water Works. It provides the most essential product we need to live that isn't free (fresh water), and one of the most critical services in civilized societies (wastewater treatment). It's the 800-pound gorilla in an industry with high barriers to entry (regulatory as well as high fixed costs). And it pays a dividend, to boot.

Don't let American Water's 2008 IPO date in the preceding chart fool you -- it's no upstart. The company has been in business since 1886. It was owned by a German energy conglomerate before being spun off in 2008.

American Water provides water and wastewater services to about 15 million people in 47 U.S. states and in the Canadian province of Ontario. It has plenty of growth potential in its core regulated business, which operates in 16 U.S. states, because the water utility industry in the U.S. is very fragmented.

The company also has several market-based businesses, which include providing services to military bases and supplying water to natural gas companies in the Appalachian Basin. The income streams from these businesses are not as predictable and dependable as that generated from American Water's regulated business. However, these businesses combined account for just a small portion of the company's overall business  -- 5.9% of the combined segment adjusted net income in the first nine months of 2016 -- so they present minimal risk. Moreover, they provide a nice dose of growth potential since the company sets its own prices, though the military base work is obtained by competitive bidding.

Analysts project that American Water will grow earnings per share at an average annual rate of 7.6% over the next five years. By contrast, the industry's second-largest player that operates in the U.S., Aqua America, is expected to grow EPS at an average annual rate of just 6%. The company's dividend, which it's raised every year since going public, is currently yielding 2.03%. 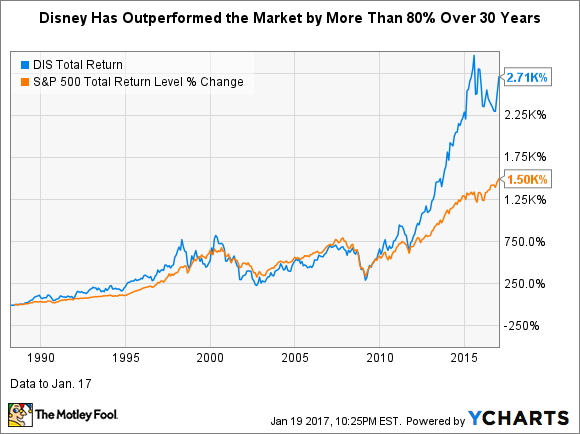 Disney doesn't provide a product or service that is as basic to survival as, say, fresh water or healthcare. However, partaking in some form of entertainment or leisure activity is an incredibly strong basic human desire. And storytelling -- Disney's forte -- has long been believed by anthropologists to be central to human existence.

Disney has a plethora of top-notch intellectual property that enables us to satisfy our cravings for storytelling and entertainment, including brands such as its flagship Disney brand, ABC, ESPN, Star Wars, Pixar, Marvel, and others. It leverages its brands across its diverse empire, which includes moviemaking, network and cable TV broadcasting, theme park and cruise line operations, and consumer goods licensing.

Three of Disney's four businesses -- parks and resorts, studio entertainment, and consumer goods/interactive media -- have been humming along very well. And there are numerous catalysts for growth on the horizon, including four more Star Wars' films slated for release through 2020 and megagrowth potential for the Disney Shanghai theme park, which just opened last June.

The company has been experiencing challenges in its cable business. The rise of video-streaming options has resulted in an increasing number of consumers cutting cable entirely or slimming their large cable bundles. Disney has been taking aggressive steps to address this threat. It's been getting some of its content included in various distributors' "skinny bundles," or limited-content over-the-top products. It also bought a 33% stake -- with future rights to buy a controlling stake -- in video-streaming leader BAMTech, to provide it with the capability to bring its content directly to consumers. If you believe that "content is king," then you should be confident that Disney will be able to thrive in the evolving consumer TV-viewing market. After all, it's successfully navigated numerous changes in the consumer-entertainment landscape since its founding in 1923.

Disney's dividend currently yields 1.38%. While this is modest -- the S&P 500 yields about 2% -- there's much room for growth. Disney's cash-dividend payout ratio is a conservative 27.4%. In general, a ratio of about 60% or less suggests investors can probably count on continued dividend hikes.