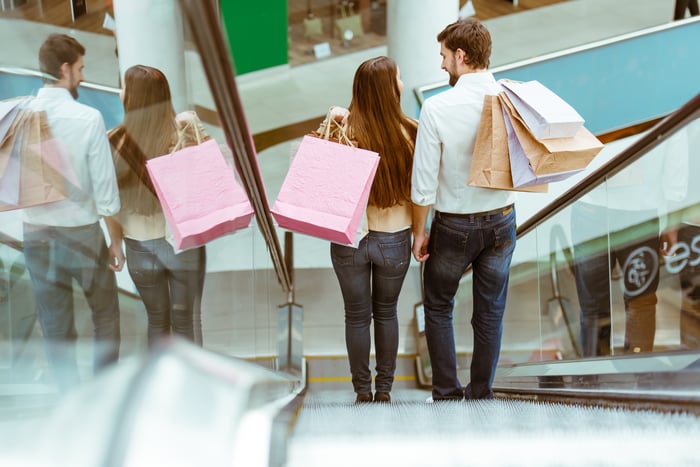 2016 was a rough year for retail stock as a number of big-name department store chains like Macy's and Sears Holdings announced dozens of store closures and retailers segments saw falling sales.

Not surprisingly, the sector underperformed the broader market: the SPDR S&P Retail ETF gained just 2%, compared to a 10% gain for the S&P 500. The ETF is still more than 10% off its peak in the summer of 2015, while the broad-market indexes are at record highs.

The e-commerce threat from Amazon.com and others is upending much of retail, pushing comparable sales down at several large chains. But there have been some winners. Perhaps unsurprisingly, they are in sectors that are better protected from the forces of e-commerce.

Shares of beauty salon chain Ulta have been on fire in recent years -- the stock gained 38% last year, and has more than tripled in the last three years. As a hair salon chain, the company's services cannot be outsourced on the internet, making it an attractive partner for malls and shopping centers as a traffic driver.

The company has also posted strong comparable sales to boot. In the third quarter, the most recent one, comparable sales surged 16.7%, lapping a 12.8% from the year before. That increase was driven by an 11.1% increase in transactions and a 5.6% uptick in the average ticket.

For the first three quarters of 2016, comparable sales are up 15.4%. That organic growth has driven earnings per share up 30% through the yeah, and while salon comparable sales have been slower-growing than beauty products, they are still strong, and the business model has proven to be a winner. I'd expect more strong growth from Ulta going forward as long as the economy remains strong.

#2 on the list is also a bit of an unconventional retailer. MarineMax is the nation's largest recreational boat and yacht retailer. Like a haircut at Ulta, a yacht isn't something you can just pick up on Amazon, and its comparable sales have also soared in recent quarters. In the company's most recent quarter, same-store sales jumped 12% following a 17% pop the year before, and for the fiscal year ended September 30, comparable sales soared 22%, hitting that clip for the second straight year.

A newcomer to the public markets, Camping World debuted in October with strong comparable sales momentum, and has a model similar to MarineMax's. Instead of trafficking in boats, however, Camping World sells RVs, and calls itself the only provider of a comprehensive portfolio of services for RV enthusiasts.

Camping World shares have surged since its IPO, up 39% in just a few short months. The election of Donald Trump seems to have pumped up RV stocks as cyclical manufacturers got a boost on hopes for increases in manufacturing and economic expansion, along with infrastructure spending. Since the election, shares of Thor Industries are up 31%, while Winnebago Industries gained 17%. That bullish sentiment helped drive Camping World up 49% since the election.

Though Camping World's comparable sales growth has been trending down lately, the stock should continue to rise if the economy continues to expand, especially as the stock looks like a bargain with a P/E ratio near 15.