Shares of Marriott International (NASDAQ:MAR) rose more than 26% in 2016, according to data from S&P Global Market Intelligence, most of which came in the last three months of the year, after the company officially merged with Starwood Hotels to become the largest hotelier in the world.

After the Starwood deal was first announced in 2015, the plan had to get approval worldwide. Once the merger finally was completed in September, the stock was up about 3% year to date. The stock really began to rise after the company's Q3 earnings came out on Nov. 7.

Marriott's earnings for the quarter ended Sept. 30 actually showed a 67% decrease in net income. However, that decrease was because of merger-related costs, and adjusting for those one-time expenses, Marriott's adjusted earnings per share grew 17% year over year. Compare that to Hilton Worldwide's (NYSE: HLT) EPS, which was down 32% year over year, or flat year over year adjusted for its own special items.

Investors rewarded Marriott stock, apparently excited to see proof that the merger will lead to increased earnings once these costs are out of the way. Marriott has guided for a 9%-14% increase in operating income for full year 2016.

Looking ahead to 2017, Marriott stock runs the risk of being too expensive. After its 2016 run-up, the stock is trading at 30 times earnings, compared to just 12 times for Hilton. If the stock doesn't perform quite as well as expected in one quarter this year, it could get punished. 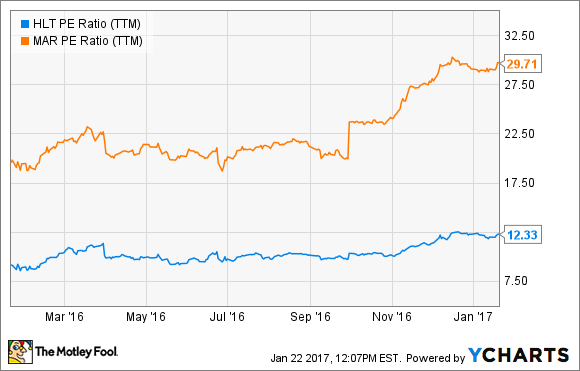 Still, the merger could unlock more value. Management noted that it will use the 30 brands under its umbrella and vast global presence of 1.6 million rooms available or in the development pipeline to gain more market share and will seek to continue utilizing merger-related cost efficiencies to boost earnings. Marriott stock is trading at just 20 times expected earnings, and Marriott stock could still have plenty of room to run.