Self-driving features for Tesla Motors' (NASDAQ:TSLA) electric vehicles may come through software updates in as little as three to six months, Musk tweeted on Monday. Of course, these features will almost certainly still fall short of full autonomy, but the news is interesting since it was generally thought that it would take longer for the company's new self-driving add-on to begin morphing into a compelling upgrade option.

Alongside the introduction of its new Autopilot sensors in October, customers buying a Tesla now have a choice between upgrading to Enhanced Autopilot for $5,000 or paying $8,000 for both enhanced Autopilot and what Tesla calls full self-driving capability. But since Tesla's self-driving package won't enable new features until the new sensors and respective software have undergone extensive validation and regulatory approval (where necessary), there's been little incentive to pay the additional money for Tesla's full self-driving capability option. After all, customers can purchase the full self-driving option after delivery (albeit for an additional $1,000), so there's good reason to wait if customers won't get access to any new features by upgrading today.

But apparently, it won't be too long before Tesla's full self-driving capability evolves into a noticeable improvement over Enhanced Autopilot.

What new features may Tesla introduce?

Speculating what features the company might debut for its full self-driving capability package first, one obvious expected feature is improved safety. On Tesla's website, the company says vehicles with full self-driving capability will access eight cameras instead of four. When these sensors are activated in conjunction with automatic steering and adaptive cruise control, safety will likely improve significantly. Indeed, when asked this Monday whether the additional cameras will provide value before regulatory approval for autonomous driving, Musk tweeted back, saying, "Yes, safety should improve significantly due to autonomy features, even if [regulations] disallow no driver present." 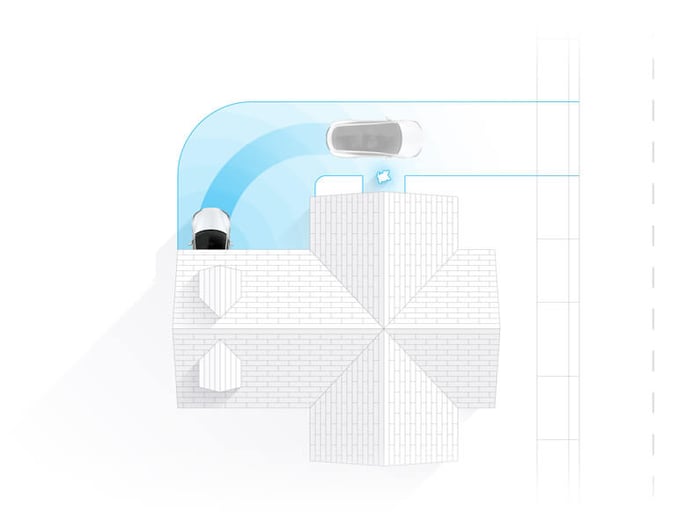 Smart Summon is a feature for Tesla's Enhanced Autopilot, but Tesla may build on the feature's capabilities for its self-driving upgrade option. Image source: Tesla Motors.

Another potential feature to debut before regulatory approval for autonomous driving is park seek, or the ability for your vehicle to drop off a driver at the entrance of their destination and then seek for a parking spot. Similarly, Tesla could introduce improvements for its Smart Summon, which, for Tesla's Enhanced Autopilot, promises to "navigate more complex environments and parking spaces, maneuvering around objects as necessary to come find you" when summoned out of parking spaces and garages. Perhaps summoning enhancements for Tesla's full self-driving capability will enable even longer distances and even more complex environments.

The speed with which Tesla hopes to begin making its full self-driving capability noticeably better than Enhanced Autopilot is important. It means more customers may be paying up for the more expensive add-on sooner. And since Tesla already delivers every vehicle with the sensors required for its full self-driving package, more upgrades mean incremental margin for Tesla. This incremental margin can be used to help Tesla pour back more money into the development of Enhanced Autopilot and autonomous driving features.