Stocks logged solid gains on Tuesday as the fourth-quarter earnings season moved into high gear. The Dow Jones Industrial Average (DJINDICES:^DJI) didn't cross the 20,000 point mark, but it and the S&P 500 (SNPINDEX:^GSPC) both finished higher by more than 0.5%.

Johnson & Johnson ticked down 2% after the healthcare titan posted its fourth-quarter earnings results. Revenue rose 1.7% to mark a pace that was just below consensus estimates. Its $1.58 per share of adjusted profits, meanwhile, edged past Wall Street targets of $1.56 per share.

In a switch from the past few quarters, the consumer products segment led the way with 5% growth, compared to a 3% boost for the pharmaceutical unit and a 1% gain in medical devices. Yet that late-year success wasn't enough to catapult consumer products past a pharmaceutical segment that expanded 7% in 2016 thanks to strong sales of products like plaque psoriasis treatment Stelara and chemotherapy drug Imbruvica.

"We are pleased to report that we accelerated our adjusted growth for 2016 over the prior year, and delivered a strong total shareholder return of greater than 15 percent," CEO Alex Gorsky said in a press release. Included in that return was a 9% boost in adjusted annual earnings, a dividend yield of nearly 3%, and billions of dollars spent on share repurchases.

Gorsky and his executive team issued a cautious outlook for the coming year, guiding to sales of between $74.1 billion and $74.8 billion and adjusted earnings of $7.01 per share. Consensus estimates were looking for slightly more on both the top and bottom lines, but the forecast leaves open the possibility that Johnson & Johnson will log another year of accelerating sales and profit growth in 2017. 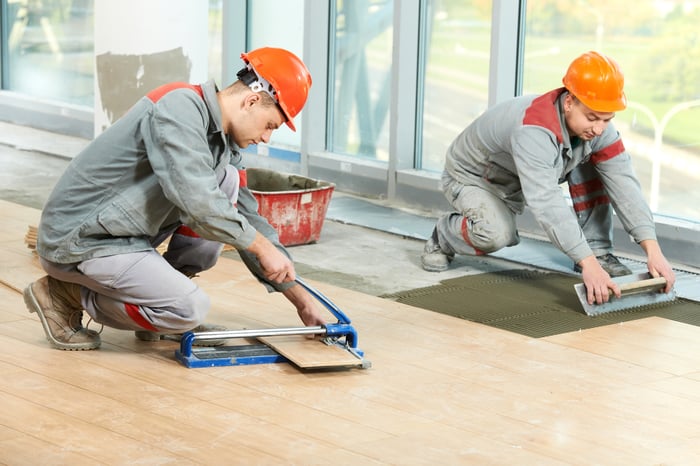 Gross profit margin held steady at 20% of sales, but a significant decline in expenses pushed bottom line profitability up a full percentage point, to 11% of sales.

"These results reflect the strength of our experienced operational teams, diverse product offerings through our family of brands and good market conditions across our broad national footprint," board Chairman Donald Horton said in a press release.

The company is prepared for a strong selling season ahead, and it has bulked up its inventory position for both houses and lots. Confidence around orders over the next few months has the company projecting a further uptick in profit margin to as much as 11.5% as it closes on as many as 45,500 sales. Its ability to hit those aggressive targets will depend on shopper habits over the critical spring selling period.