Bargain hunting in an expensive market is no easy task. While value investors had plenty of attractive opportunities just a few years ago, finding solid companies trading at a discount to their true worth has become a challenge, especially following the post-election rally.

There are still some bargains out there, though. General Motors (NYSE:GM), Skechers (NYSE:SKX), and Caesarstone (NASDAQ:CSTE) are three stocks that should be on every value investors' radar. Here's why I own all three of these bargain stocks.

Still cheap after a big run

Shares of General Motors have jumped more than 20% since the election, but the stock still looks like a great deal. Despite signs of a plateauing U.S. auto market, the company expects to grow adjusted earnings per share in 2017. The company guided for adjusted EPS between $6.00 and $6.50 this year, up from a guidance range of $5.50 to $6.00 in 2016. With a stock price around $38, that puts GM's forward price-to-earnings ratio as low as 5.8. 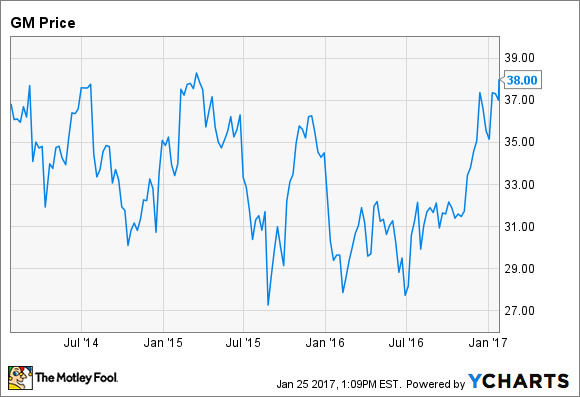 There are a few legitimate reasons to be pessimistic. In a flat market, increased promotional activity and incentives could drive down margins. GM doesn't expect this to be a problem in 2017 based on its guidance, but the company's outlook may be overly optimistic.

The Trump administration is a wildcard for the auto industry. With promises to punish companies that move jobs overseas and to be tough on China, an important market for GM, it's impossible to predict how this will all play out.

I was surprised that GM guided for earnings growth in 2017 given all of this uncertainty, and I'm not entirely confident that the company will hit its targets. GM stock isn't as cheap as it seems due to these risks, but I still think the market is being overly pessimistic. GM's earnings would need to fall dramatically in the coming years for investing in the stock today to turn out to be a bad idea.

When a growth stock stops growing, watch out below. Skechers made a habit of posting double-digit revenue growth from the beginning of 2014 through the first quarter of 2016, but a slowdown mixed with some so-so earnings reports sent the stock tumbling. Shares of Skechers are now down about 50% from their peak in mid-2015. 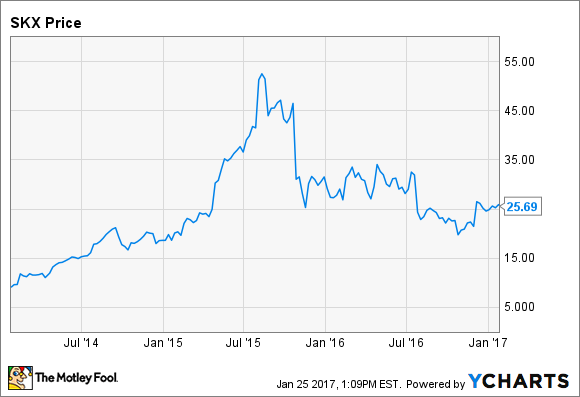 The main problem for Skechers has been its U.S. wholesale business. The company expects roughly flat revenue during the fourth quarter, with a decline in U.S. wholesale revenue offset by growth in the international wholesale and retail businesses. The international business will be the biggest growth opportunity for the company going forward, but the market is pricing the stock like its growth days are over.

Analysts expect Skechers' 2016 adjusted EPS to be $1.64. With a stock price around $26, this estimate puts the price-to-earnings ratio just shy of 16. The stock was much cheaper immediately following the company's third-quarter report, touching lows below $19 per share. But with the S&P 500 index sporting a P/E ratio well above 20, the market isn't very optimistic that Skechers can turn things around.

Skechers isn't the cheapest stock around. But if the company can return to growth, driven by its international business, a recovery in the stock price would likely follow.

Caesarstone, an Israel-based manufacturer of engineered quartz surfaces, has run into some trouble. Growth in the United States, the company's most important growth market, has ground to a halt. During the third quarter, sales in the U.S. slumped by 5%. Other growth markets, namely Australia and Canada, are performing well, but not well enough to counteract weakness in the U.S. 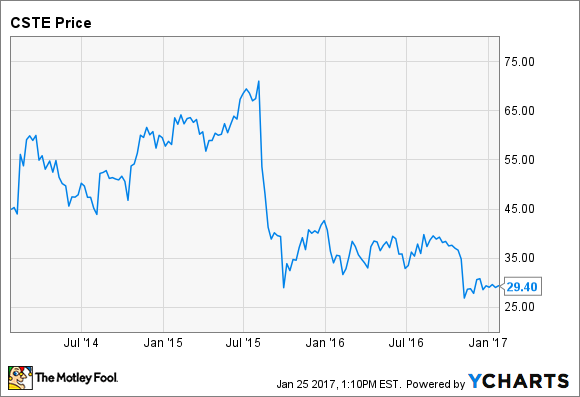 Caesarstone is having manufacturing issues at its U.S. factory, which it opened in May 2015. According to Caesarstone chairman Yonathan Melamed, the company has located the major problems and expects the performance of the factory to improve significantly in 2017. The company made clear in its third-quarter conference call that its U.S performance was not driven by demand, instead the result of manufacturing difficulties.

Caesarstone stock has been hammered since mid-2015, dropping from around $70 per share at its peak to around $30 per share today. Analysts are expecting the company to report 2016 EPS of $2.20, putting the P/E ratio at just 13.4. Growth in the U.S. should resume once the manufacturing kinks are worked out, but the market is pricing the stock as if that will never happen. It may take multiple quarters to start seeing improved results, but I see little reason to doubt Caesarstone's ability to return to growth in the U.S. This undue pessimism makes Caesarstone a solid bargain.