Energy is back, baby!

OK, maybe that's a little too optimistic, but the oil and gas market is in much better shape at the beginning of this year compared to entering 2016. Oil is hovering around $55 a barrel, and OPEC's decision to finally work to maintain prices instead of market share has given the market confidence that we aren't headed for a steep drop any time soon.

Just because the market for oil and gas stocks is looking better doesn't mean investors should look at every oil stock out there. There are some real duds out there are to be avoided. We asked three of our energy contributors to highlight a stock they think is not worth an investor's research time. They responded with Cobalt International Energy (NYSE: CIE), Calumet Specialty Product Partners (NASDAQ:CLMT), and Petrobras (NYSE:PBR). Here's a quick look at why these three names aren't worth pursuing.

The wrong way to build an oil company

Matt DiLallo (Cobalt International Energy): Offshore oilfield developer Cobalt International Energy more closely resembles a biotech company than a typical oil company. Instead of buying a legacy field and using the cash flow to invest in new projects, the company chose to start from scratch. Worse yet, it decided to focus on offshore exploration, which is high-cost and takes years to turn a discovery into oil production. It is an ultra-high-risk approach that is still years from paying off -- if the company can survive to see that day.

Last year, Cobalt finally produced oil for the first time in its decade-long history after the Heidelberg project -- where Cobalt is a minority stakeholder -- came online. However, the oil and gas production from that project only provided the company with $13.7 million in operating cash flow through the first nine months of last year. That did not come close to covering the $472.9 million it spent on its various project developments.

Cobalt has two choices to bridge that gap: issue more debt and equity to outside investors, or sell assets. The first option is unappealing given that the company's stock price cratered during the downturn, in part because of the weight of the debt issued to finance development projects. That leaves asset sales as its only palpable option, though these have proven to be easier said than done after its Angolan asset sale fell apart last year thanks to the oil price crash.

While rising oil prices might help Cobalt by lifting the value of its assets, and opening up more opportunities to raise cash, the company remains highly risky because it cannot finance growth internally. That is why I would not touch this oil stock with a 10-foot pole no matter how high oil prices go this year.

Still lots of issues to sort out

Tyler Crowe (Calumet Specialty Products Partners): Any investor with a bullish outlook on Calumet Specialty Products Partners will point to one thing: Its specialty product business segment is a consistent cash flow generator with decent margins. There is no denying that, and there is reason to believe that this business, by itself, would be a worthwhile investment in oil refining and petroleum product manufacturing.

The trouble with Calumet, though, is that this seemingly stable, profitable business is buried under a mountain of debt and is tied to unprofitable, more cyclical business segments that have wreaked havoc on the income statement over the past two years. Most of those less lucrative business segments were added between 2011 and 2015 as management wanted to diversify. But that spending binge was fueled almost exclusively with debt, and now the company is shelling out more in interest expenses than its trailing-12-month EBITDA.

I'm sure someone could argue that 2016 was one of the worst years in a long time for refining, which is certainly true. With so much debt, though, it's going to be close to impossible to generate enough cash even when the refining industry picks back up to pay down debt and implement CEO Timothy Go's turnaround plan. Until we actually see some of this turnaround take place, and there is some significant -- and I mean significant -- debt reduction, then Calumet's stock should be avoided at all costs.

The oil giant lost at sea

Travis Hoium (Petrobras): One of the high-flyers in oil that's fallen back to earth in the past few years is Petrobras, but the stock may still be overvalued. The company has been plagued by corruption scandals that never seem to end, and its main natural resource is oil in deep water off the coast of Brazil, which is some of the most expensive oil to extract today.

On top of its poor strategic position, the company is coming from a place of financial weakness. It has over $122 billion in debt and has lost $15 billion in the last year. 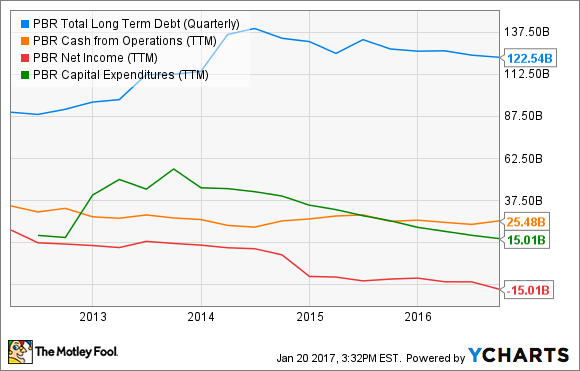 Capital expenditures fell below operating cash flow for the first time since 2012, but that also means the company isn't investing in developing resources for future growth.

With all of this said, Petrobras could recover if oil rises far enough. But the upside doesn't seem to be worth the risk. Net income was just $10.8 billion in 2013, when oil was around $100 per barrel, so oil has a long way to go before investors will see value from investing in a company with $122 billion in debt and a $64 billion market cap. The overhang of debt and corruption are too big, even if oil prices continue to rally, and they will keep me far away from this stock.