When Microsoft (NASDAQ:MSFT) first launched its Surface lineup in 2012, I had my doubts as to whether or not the company could successfully jump into hardware. The company has had its fair share of missteps for the Surface, but it's safe to say at this point that Microsoft has exceeded most early expectations for its first-party devices. Microsoft has adapted quickly to flops like Surface RT, which resulted in a $900 million writedown back in 2013, and pushed forward with expanding the portfolio, most recently with Surface Studio.

Surface revenue during the fourth quarter came in at $1.3 billion, representing a sequential increase of over 40% for the busy holiday shopping season. That's enough to bring full-year 2016 Surface revenue to an impressive $4.3 billion. 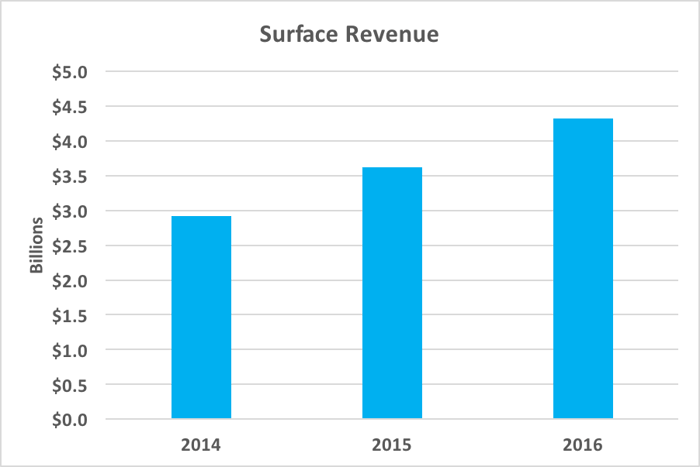 It also probably helps that CEO Satya Nadella is a stronger leader than his predecessor, even though the Surface strategy was conceived under Steve Ballmer. The push with Surface hardware created a rift between Ballmer and Bill Gates, and may have also contributed to Ballmer's ouster.

During the earnings call, Nadella noted that Surface has enjoyed three consecutive quarters of 25%-plus growth. Sales mix is transitioning toward the newer products like Surface Pro 4 and Surface Book, and Surface 3 sales are expected to continue winding down.

The customer reception for Surface Studio in particular has been strong, which is especially impressive for two reasons: Surface Studio was not widely available during the fourth quarter, and it's extremely expensive, starting at $3,000. Inventories for the new all-in-one should start improving this quarter as production ramps up.

More broadly, Surface is but part of a bigger push among the Windows PC crowd to take a bite out of Apple's (NASDAQ:AAPL) turf: the premium PC market. Surface is doing well, but it was never expected to comprise a large chunk of the Windows ecosystem; that's what original equipment manufacturers (OEMs) are for.

CFO Amy Hood said that Microsoft's "OEM non-pro performance should grow ahead of the market, due to strength in the premium device category." In other words, high-end consumer-oriented PCs made by Microsoft's partners are gaining traction in the market, at a time when Apple lost PC market share for the first three quarters of 2016 (Apple reports fourth-quarter results next week). OEM non-pro revenue grew 5% last quarter, outpacing the broader PC market.

Surface is profitable, too

It's also worth pointing out that Surface is now profitable on a gross margin basis (up 6% last quarter in dollar terms), so those revenue gains are starting to enjoy some operating leverage.

Unfortunately, currency headwinds are adversely impacting profitability, as Surface gross margin was up 17% on a constant currency basis in dollar terms. There's a big discrepancy between the currency impacts on revenue (2 percentage points) compared to gross margin (11 percentage points), which is due to the fact that Surface devices are manufactured in Asia and the Surface cost structure is more vulnerable to currency fluctuations.

Still, you have to give Nadella credit for being able to take a struggling segment conceived under Ballmer and turn it into a profitable $4.3 billion business within just a couple of years.