A recent report shows that companies that form an emotional connection tend to outperform the competition. Which ones do baby boomers love?

It would seem common sense that a company that has a closer relationship with its customers would perform better. The Brand Intimacy report from market research firm MBLM confirms this. The report reveals that if consumers feel a strong emotional attachment to a brand -- what it terms "brand intimacy" -- that company enjoys better financial results than those that don't. MBLM reports that the most intimate brands produce higher revenues and earnings and better stock price performance than non-intimate brands. The report identifies the top companies that have most successfully created and sustained that connection with their customers. 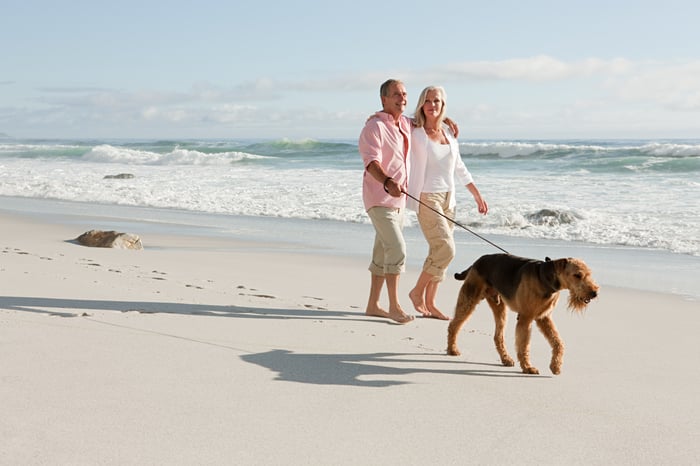 Baby boomers represent a disproportionate amount of the wealth and spending among the population. Some estimate that baby boomers control as much as 70% of the disposable income in the country. A report [opens in PDF] issued by Synchrony Financial indicates that as consumers, the group is fiercely brand loyal, wants seamless customer service, and is very comfortable shopping using mobile devices. In preparing its Brand Intimacy Report, MBLM surveyed 6,000 consumers between 18 and 64 years old. Those aged 55 to 64 were the oldest subset and are likely representative of the full baby boomer generation, which most people define as those between 53 and 71 years old. Let's look at the most adored brands among this demographic from No. 5 to No. 1, according to the MBLM survey.

5. Samsung (NASDAQOTH: SSNLF): Samsung was bound to make an appearance on this list, with its No. 1 position in worldwide smartphone market. Even in the face of the Galaxy Note 7 fiasco, boomers are brand loyal, and as many as 41% of the owners surveyed indicated they couldn't live without their device and nearly 82% say they use their device daily. Samsung is also known for other home electronics such as TVs, which may play into its popularity.

4. Coca-Cola (KO 1.88%): Coca-Cola helped keep soldiers supplied with its soda pop during World War II, distributing over 5 billion bottles  to U.S. service personnel, for whom the company pledged a price of 5 cents per bottle. It became a staple in the homes that boomers grew up in. Coke is legendary for heartstring-tugging advertising campaigns. "I'd like to buy the world a Coke" (1971) and "Thanks, Mean Joe!" (1979) were iconic ads of their era, and it's no wonder that baby boomers feel a connection to this brand. It has continued to use nostalgia in its message, which taps into the brand loyalty. Food industry activist Marion Nestle told The Washington Post in 2015: "The advertisements are designed to sell happiness. They're not selling a drink. But on an emotional level you attach to it."

3. Toyota (TM 0.99%): Baby boomers were out to prove that they were not their parents and were not bound by the "Buy American" mindset. They were concerned with gathering information when making purchases and having options. They were also part of the 20th century trend that viewed a car as freedom and an extension of themselves.  When the US energy crisis arrived in 1973 and caused gas shortages and long lines at the pumps, boomers embraced Toyotas as fuel-efficient alternatives to their gas-guzzling American counterparts.  Toyota has also built its brand on reliability.

2. Levi Strauss & Company: Levi saw its blue jeans gain popularity in the late 1950s and early 1960s through such movie icons as Marlon Brando and James Dean. This development led to a boom in popularity among then-teen baby boomers. Levi's bell bottoms were a staple of the counter-culture revolution. This loyalty carried into their adult lives: Fashions changed, but Levi's remained the same. Baby boomers are known for their steadfast brand loyalty, and Levi's have been with them every step of the way.

1. Amazon.com (AMZN 3.58%): Are you surprised that this e-commerce behemoth is the most beloved by baby boomers? Consider these statistics from Synchrony Financial: they spend more time online than their millennial counterparts, with 51% spending 15 hours per week online, compared with only 41% of millennials. A more telling statistic is that 70% of boomers report using Amazon at least once per month. With more money and more time, this demographic is embracing e-commerce, and nobody is bigger than Amazon. Boomers want a variety of products and want to be able to find them. Sounds like a description of Amazon in a nutshell.

If this list reveals one thing, it is that there are many ways to connect with consumers on a visceral level: nostalgia, utility, or just being where they are. There is no one method that works across the board. Equally, there is no silver bullet or single metric one can use when looking to find a winning investment. There are many data points that should be considered, and the concept of brand intimacy is merely one additional tool in an investor's toolkit.