Please ensure Javascript is enabled for purposes of website accessibility
Log In Help Join The Motley Fool
Free Article Join Over 1 Million Premium Members And Get More In-Depth Stock Guidance and Research
By Jeremy Bowman - Updated Aug 22, 2018 at 11:57AM

If you're wondering what the best stock of the past 20 years is, there's a far-and-away winner. 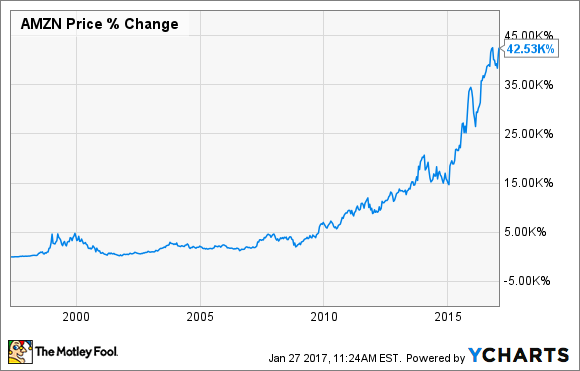 In other words, $1,000 invested at that time would today be worth more than $420,000. Amazon's market value at the time of the IPO, which was $300 million, has grown by more than 1,000 times as the company is now worth nearly $400 billion. Share dilution has made the increase in the individual share value less.

What's amazing about Amazon is that even as it's become one of the five most valuable companies in the country, the company continues to grow at a breakneck rate. Analysts are expecting revenue to have increased 28% in 2016 when the company reports full-year earnings on Feb. 2, and for earnings per share to have grown nearly fourfold from a year ago, thanks to blockbuster growth at its cloud computing division.

With that kind of momentum and the popularity of programs like its Prime membership service, it seems likely that Amazon will become the most valuable company in the world in the next decade. Here are three reasons for that outlook.

No company has put a greater emphasis on invention in the past two decades. Founder and CEO Jeff Bezos has credited the company' success on the three big ideas: Put the customer first. Invent. And be patient.

Amazon has been at the forefront of a vast range of emerging industries since its inception, including e-commerce, e-readers and e-books, cloud computing, video streaming, digital technology such as Alexa, and even drone delivery.

Amazon's culture encourages invention, risk-taking and failure, and that culture seems to be the biggest driver of its success. The company's recent opening of its Amazon Go store offers a perfect example. Using a network of cameras and other advanced technologies similar to self-driving cars, the convenience allows customers to select items and simply walk out of the store with them. There is no checkout process. Amazon just charges customers automatically through a smartphone app. The company spent four years working on the technology, and its willingness to make those kinds of sacrifices have enabled it to gain such market power. The company's emphasis on making things easier for the customer and developing new technologies is what's made it such a powerful disruptor across so many industries.

A more-hidden aspect of Amazon's unique culture may be the company's extreme competitiveness. Bezos has repeatedly issued broadsides to rivals such as "Your margin is my opportunity" and operated with breakeven margins for 20 years as the company built out scale. While most businesses seek out profits to satisfy shareholders, Bezos has always been content to play the long game, promising investors from day one that he was building a company for the long term, and it's paid off.

A much-read 2015 New York Times expose described Amazon as a brutal workplace where much is demanded of employees whose ideas are sternly challenged and even belittled. But even the harsh workplace environment may contribute to the company's strength.

The company has often elbowed out smaller competitors by using monopolistic tactics. When Quidsi's Diapers.com began taking significant market share from Amazon, the e-commerce leader responded by lowering diaper prices by a third, bleeding Quidsi until it sold itself to Amazon.

In book publishing, Amazon got involved in a lawsuit when it refused to abide by a publisher's prices, with the publisher insisting the prices were necessary to give authors adequate incentive and keep the industry alive and profitable. Amazon wanted to charge $10 for most e-books and went as far as essentially refusing to sell 5,000 titles from Hachette, delaying shipments by weeks for no reason other than to punish the publisher for not cooperating. Amazon eventually caved in to the publishing houses, agreeing to their pricing model, but it still maintains monopoly-like control over the bookselling industry.

Complementing Amazon's inventiveness and its ultra-competitveness is the company's network of competitive advantages. Amazon has a built a reputation as a low-cost provider, although recent studies have shown that the company is most competitive on price on only the most popular products.

Regardless, Amazon has gained the trust of many of its customers, especially Prime members who go directly to Amazon when they need to order something online. Prime has encouraged Amazon shoppers to spend double what they used to on the website and encouraged members to participate in other parts of Amazon's ecosystem, such as video streaming and Kindle books.

But not all of Amazon's competitive advantages are customer-facing. The company's Marketplace and Fulfillment by Amazon have made the website the most popular home for third-party vendors. That adds another revenue stream for Amazon and in turn makes it the more appealing for customers as it increases its product range.

Finally, Amazon's reputation with customers allows it to easily enter new industries as it did when it launched Home Services, offering services such as house cleaning or furniture assembly through third-party vendors.

As Amazon continues to build out new fulfillment centers and unveil technologies like Amazon Go and Alexa, its competitive advantages are likely to increase. Considering the vast majority of retail spending still takes place off line, Amazon has a long growth path ahead.

Expect the company to keep disrupting industries far and wide over the next decade as it continues its quest to take over the world.