"2016 was simply a great year for us," said Alphabet (NASDAQ:GOOG) (NASDAQ:GOOGL) CFO Ruth Porat during the company's fourth-quarter earnings call. And it would be tough to argue with her. In 2016, Google parent Alphabet's revenue and profits increased, its core advertising business, non-advertising initiatives gained significant traction, and it wrapped up the year with two very successful Google-branded hardware launches. Here are eight facts to help capture Alphabet's business in 2016. 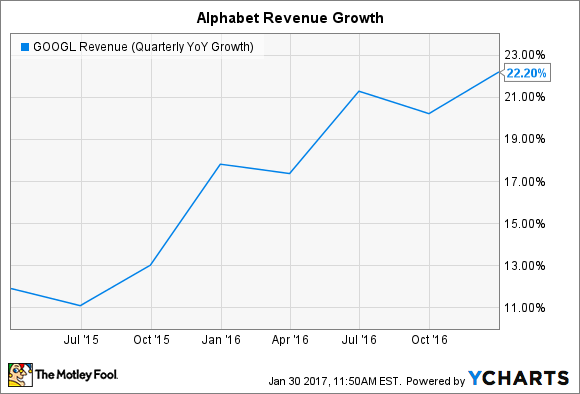 Other revenue increased 41%. Not to be confused with Alphabet's much smaller other bets segment, the company's other revenue, which is made up of non-advertising Google products, was driven primarily by Alphabet's Google Play app store, hardware sales, and cloud businesses.

In October, Alphabet launched a smart speaker and a smartphone. The company's voice-activated Google Home speaker and its new Google Pixel phone were clear successes this holiday season. While the company doesn't provide specific sales figures on the device, management did say it was "thrilled with the reception" for these devices, and that their success looks promising.

Alphabet made significant progress in its cloud business. Management said in the company's fourth-quarter earnings call that its cloud business is on a "terrific upswing." With the help of Alphabet's well-timed $625 million acquisition of API provider Apigee, Alphabet made particular progress differentiating its Google Cloud Platform (GCP) by sharpening its offerings in data analytics, machine learning, security, and tools for application development. Further, in 2016, Alphabet's Google Cloud's G Suite product, which offers cloud-based collaboration and productivity applications, garnered more than three million paying customers by the end of the year.

Going into 2017, Alphabet will be up against a strong benchmark: itself. With a tough year-over-year comparison of 20% revenue growth in 2016, the company will need to continue executing well across Google advertising and YouTube, as well as its smaller businesses like hardware and cloud. Further, while Alphabet's other bets are still too small to help overall revenue growth in 2017, investors should continue to look for promising signs from the segment this year.