On the bright side, Line posted a full-year net profit of 7.56 billion yen ($66.5 million) for fiscal 2016, which was a major improvement over its loss of 7.58 billion yen in 2015. But that silver lining didn't prevent the stock from slipping below its IPO price of $32.84. Does this big sell-off represent a buying opportunity for investors who missed out on the IPO? Or is Line a falling knife that should be avoided at all costs?

Line's top and bottom line miss probably wouldn't have been as painful if it wasn't accompanied by anemic user growth, declining digital sticker sales, and sliding content revenue from games, comics, and other digital products. At the end of December, Line had just 217 million monthly active users (MAUs) -- a mere 1% gain from the previous year. Its digital sticker revenues fell 9.6% annually, and its content revenues declined 7.5% during the fourth quarter.

Those numbers indicate that Line's user growth is peaking, and that its methods of boosting its average revenues per user are flopping. It also clearly indicates that bigger messaging platforms, like Facebook's (NASDAQ:FB) WhatsApp and Messenger, could eventually render Line obsolete. WhatsApp's MAUs topped 1 billion last February, and Messenger's MAUs crossed the 1 billion mark last July. Tencent's WeChat, the most popular messaging app in China with nearly 850 million MAUs, has also been expanding into nearby Asian markets -- including Line's home market of Japan.

If Line's user growth has truly stalled out, it must spend more heavily to create new value-added services for its users, advertising tools for marketers, and launch new ad campaigns to counter its rivals. This means that its newfound annual profitability might not last very long. Line also declined to offer an outlook for fiscal 2017, due to the challenges of gauging long-term demand in the smartphone app market. 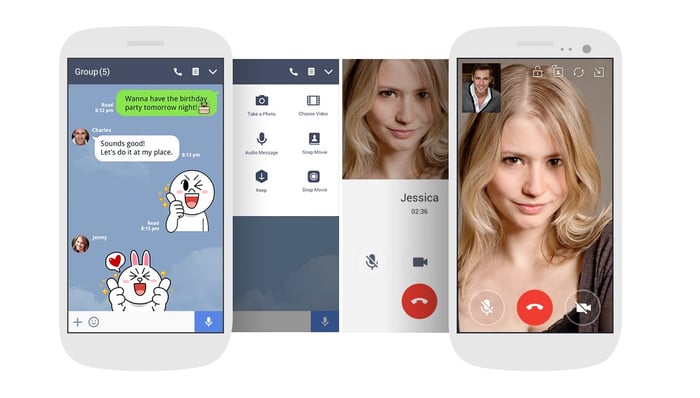 The headline numbers look bleak, but Line's core advertising business remains strong, posting 48% year-over-year growth during the fourth quarter. It also reported "steady growth" in the number of official accounts for its Messenger ads, and that its ad inventory continues to grow. Line's operating margin rose 180 basis points annually to 4.2%, indicating that competition hadn't dented its bottom line growth yet.

Line noted that MAUs for its in-app news portal Line News continues growing -- especially in its four "key countries" of Japan, Taiwan, Thailand, and Indonesia. Line stated that its combined MAUs in those four countries grew 15% annually to 167 million, outpacing its global MAU growth. If Line can widen its moat against Facebook, Tencent, and other rivals in those four markets, it might prevent its MAU growth from turning negative.

To expand its ecosystem as a "monolithic" app like WeChat and Facebook Messenger, Line has been expanding its payment abilities via partnerships with Taiwan's CTBC Bank and Indonesia's Mandiri Bank. It's also added chatbots to its system which enable companies to assist customers via AI-powered replies. Looking ahead, Creator Themes (which let creators sell custom themes instead of simple stickers), new integrated games, overseas expansion efforts, and its baby steps into the mobile virtual network operator (MVNO) space with Line Mobile could all generate new streams of revenue growth.

The verdict: Avoid Line for now

Line has some positive characteristics, but it reminds me too much of another social networking disaster, Twitter (NYSE:TWTR). Like Twitter, Line is struggling to grow beyond its niche user base, and it's doubtful that piling on a bunch of new services can help it squeeze out more revenues per user.

Line is holding on to its four key markets for now, but I seriously doubt that it can shield those markets from Facebook, Tencent, and other rivals over the long term. Therefore, I believe that Line isn't a bargain below its IPO price, and could fall even further over the next few quarters.