It wasn't too long ago that investors were deeply concerned about the outlook for Teck Resources Ltd (TECK -0.75%). Faltering commodity prices, sizable capital spending plans, and debts coming due in short order were a stiff headwind for the company's business and its shares. The winds, however, have begun to change and the forecast for Teck is starting to look a lot less risky.

Commodities at the core

There's no way around the fact that Teck mines for metallurgical coal, copper, and zinc. Thus its top and bottom lines are heavily influenced by the price of those commodities. The commodity price decline that started in 2011 had the exact impact that you would expect: The miner's revenue and earnings began to falter. In fact, the company's bottom line fell deep into the red in 2015 because of asset writedowns. 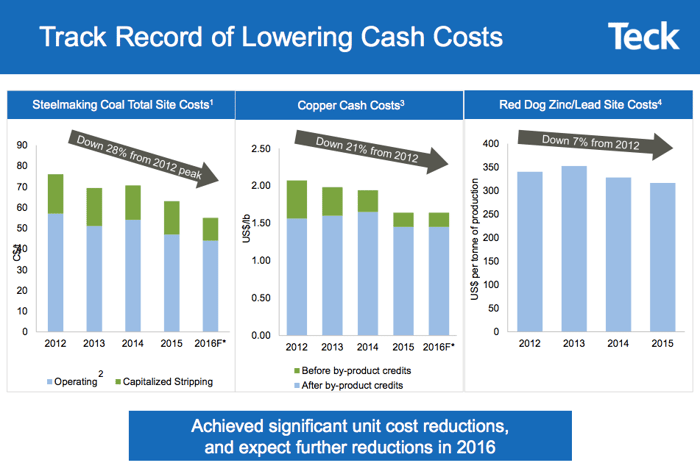 Teck responded like its peers by cutting costs and reducing capital investments. That said, it wasn't until commodity prices stopped falling in early 2016 that investors were able to breathe a sigh of relief. The company's financial results have started to look a lot better, too, even though they aren't what they were in 2011. For example, in the third quarter of 2016 EBITDA was nearly double the year-ago figure and cash flow increased by roughly 50%.

Commodity risk hasn't gone away, but the issue looks a lot less daunting than it did just a few years ago. And with the cost-cutting that's taken place, it won't be nearly as bad if the commodity rebound stalls.

The commodity problem for Teck, however, was bigger than just the top and bottom lines. Shortly before oil prices began to tank in mid-2014, Teck approved the Fort Hills oil sands project. Teck owns 20% of the project with partners Suncor Energy (SU -0.60%) (roughly 50%) and Total (TTE -0.28%) (about 30%).

It should be a great long-term opportunity. Fort Hills has a 50-year reserve life and operating and sustaining costs are projected to be less than $30 per barrel of oil. However, it's not done yet, and when 2016 started investors were justifiably worried that commodity headwinds would make paying for Fort Hills a stretch. As the year progressed, though, Teck was able to prove that it had the financial wherewithal to support its share of the costs.

Fort Hills is expected to produce first oil in the next year or so and ramp up to full production 12 months later. With the project so close to completion, and roughly $3 billion on an undrawn credit facility in addition to around $500 million in cash on hand at the end of the third quarter, Teck's ability to pay for Fort Hills isn't in question anymore.

Pushing the debt out

The piece that ties weak financial results because of falling commodity prices and heavy spending for Fort Hills together is debt. And on that front, the company started 2016 with a lot of near-term debt maturities. However, it ended the year with no material debt due until 2019 -- after Fort Hills is expected to be producing at full capacity and Teck's capital spending should be lower. 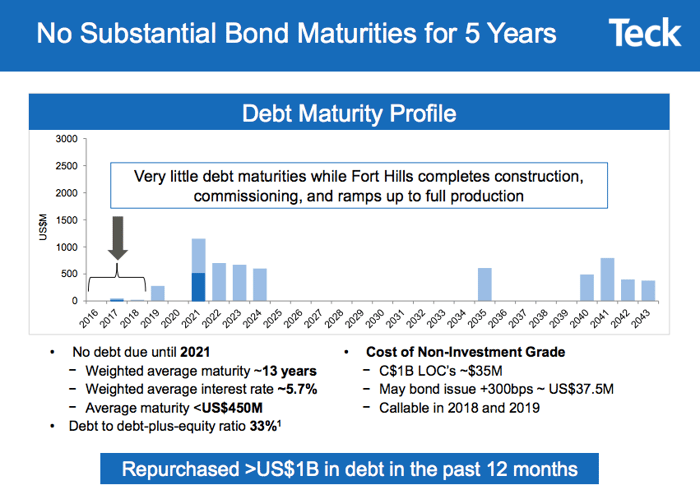 Teck has done some heavy lifting on the debt side of things. Image source: Teck Resources Ltd.

In addition to extending due dates, however, Teck was also able to trim its total debt load. To put some numbers on that, the company's debt fell by 15%, year over year, in the third quarter of 2016. That represents a roughly $1.1 billion decline. Long-term debt, meanwhile, made up roughly a third of the company's capital structure at the end of the third quarter. That's not low, per se, but it is a manageable figure. So the company's debt problems appear to be soundly in the past.

A year ago, Teck was an investment appropriate for aggressive investors betting on a business turnaround. With commodity prices strengthening, Fort Hills nearing completion, and the company's debt picture materially improved, that turnaround has progressed at a fast clip. Teck is a lot less risky today than it was not too long ago. Better yet, every day closer to Fort Hills coming online reduces Teck's risk profile even more.