Q: What's better than a dividend stock that pays you each quarter?

A: One that pays you every month.

Enter Vermilion Energy (NYSE:VET). The Canadian oil and gas company has been one of the few in the industry that hasn't cut its dividend. It pays investors $0.16 per share each month, which works out to an annualized yield of 4.6% at the current stock price. The percentage was actually much higher last year, but stock gains of 56% in 2016 tamed an even gaudier yield. 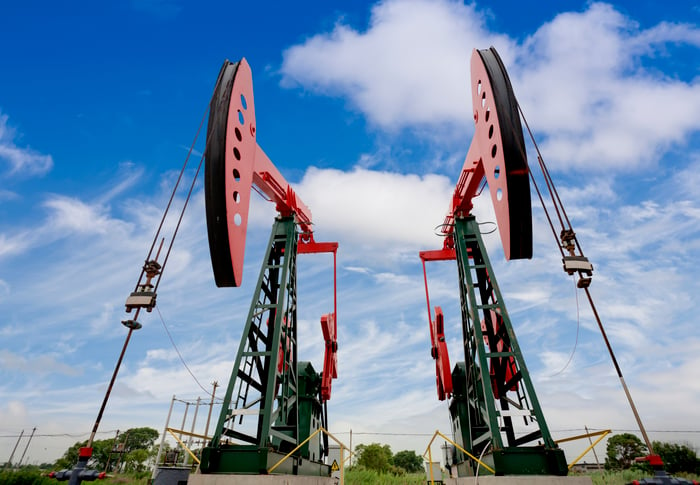 Despite a steadily rising stock price, the company still managed to lose $118 million in the first nine months of 2016. That doesn't compare very favorably with the year-ago period, which was accompanied by a net loss of just $59.7 million, with a decline in production mostly to blame. Then again, with oil prices on the rise, investors may be wondering, "Where will Vermilion Energy be one year from now?"

As crude oil prices go, so, too, do shares of Vermilion Energy. Literally. 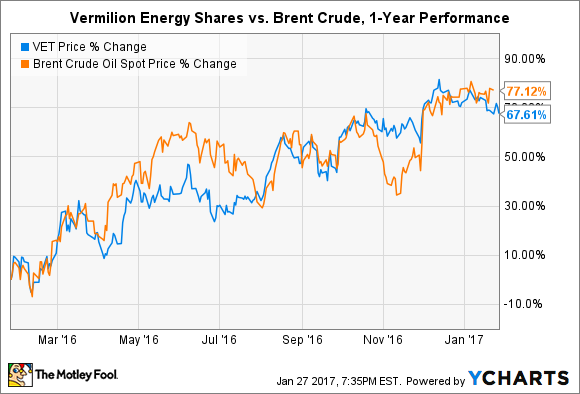 A similarly strong correlation is not uncommon for other oil producers. Either way, rising oil (and natural gas) prices mean a rising share price for Vermilion Energy investors. What's in store in the year ahead? APredictions for crude oil prices are all over the map, and there are plenty of reasons to expect more volatility in 2017.

Investors probably shouldn't expect a return to $100 per barrel oil anytime soon given the current gap between supply and demand and the ability of American shale producers to ramp production relatively quickly as prices edge higher. But investors have to be encouraged about the commodity's direction in the last year. 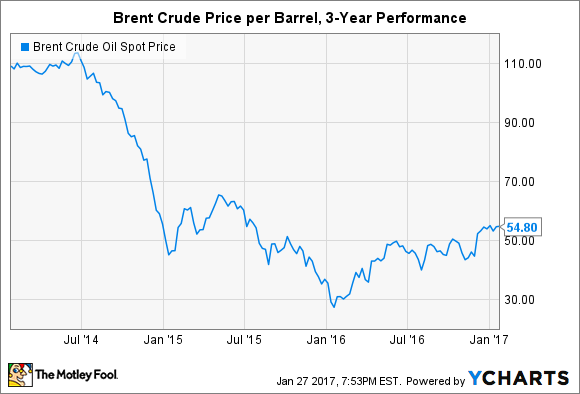 That's especially true considering Vermilion Energy increased production in 2016 compared to 2015, which puts it in a unique position to capitalize on rising crude oil prices. Management certainly seems to be planning on a near-term recovery. Here's how the company's capital expenditure guidance for 2017 stacks up to last year:

The totals could be decreased depending on market conditions. Don't forget, management originally expected 2016 capital expenditures to total $265 million before ultimately revising that figure down to $182 million as crude prices cratered at the end of 2015.

The good news is that both oil and natural gas prices are starting the year much higher than the average selling prices of 2016. The better news is that, as it currently stands, oil-rich assets in Canada are expected to receive 89% of the year-over-year increase in capital expenditures. Simply consider the relationship between the company's financial performance and crude oil prices for the first nine months of 2016 and 2015:

Considering that 49% of the company's production is priced with reference to either Brent or WTI market averages, a healthy uptick in crude oil prices in 2017 -- combined with higher production volumes -- should result in a nice boost to earnings in the year ahead.

Vermilion Energy was able to cut operating expenses when crude oil prices collapsed in late 2014, weather the storm in 2015, and increase production in 2016. Now it's looking to be rewarded for its patience. Be cautioned that it may be difficult for the dividend stock to match its 56% gain from last year. After all, the company is unlikely to be profitable one year from now. But it could be a lot closer to erasing the red ink on its income statement, which is exactly why investors are increasingly optimistic about the stock's prospects.

Where Will Vermilion Energy Be 1 Year From Now? @themotleyfool #stocks $VET Next Article
Current