Following the company's first-quarter earnings report on Tuesday, shares of Apple (NASDAQ:AAPL) are up sharply on Wednesday. At the time of this writing, Apple stock is trading at about $123, up more than 5% for the trading day. The move helped the stock hit a new 52-week high. Apple stock's move higher on Monday adds to the increasingly bullish sentiment toward the stock recently. In the past six months, shares are up about 23%, easily outperforming the S&P 500's 5% gain during the same period.

Investor optimism toward Apple stock recently is likely due to a wide range of factors, including its conservative valuation, speculation about a major redesign for Apple's expected iPhone launch this fall, and Samsung's recall of its Galaxy Note 7. But one trend in Apple's business is likely serving as a primary driver for the company's rising stock price: a rebound in iPhone sales.

At the iPhone segment's worst point last year, unit sales and revenue in the company's fiscal third quarter of 2016 declined 15% and 23%, respectively, dragging total revenue 15% lower compared to the year-ago quarter. As Apple was reporting significant year-over-year declines in its largest product segment, investors were concerned about how the product segment would perform over the longer term.

But as early as Apple's fourth-quarter earnings report in October, it was clear that the tech giant's iPhone business could soon end a three-quarter streak of year-over-year declines in total revenue. The company guided for first-quarter revenue to be between $76 billion and $78 billion, up from $75.9 billion in the year-ago quarter. Considering that iPhone accounts for over 60% of Apple's trailing-12-month revenue, this meant management was optimistic about the company's new September-launched iPhone 7 and 7 Plus. 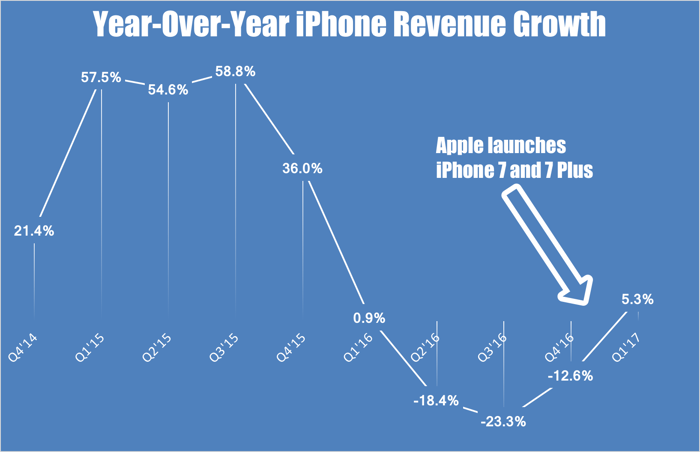 The big question going forward, of course, is whether Apple's iPhone business can keep growing. In the near term, it looks like management expects another quarter of growth. Apple said it expected total second-quarter revenue to be between $51.5 billion and $53.5 billion, up from $50.6 billion in the year-ago quarter. With iPhone accounting for the bulk of Apple's total revenue, this guidance for growth in total revenue likely means management expects growth for the iPhone, too.

Beyond Apple's second quarter, however, it's not as certain that Apple's iPhone sales growth can be sustained throughout fiscal 2017. However, a return to growth for iPhone 7 -- a product with a three-year-old form factor -- is promising news, highlighting how well the company's products continue to resonate with customers.

Combining Apple stock's conservative valuation with growth in the company's biggest product segment, it's easy to see why investors are optimistic about the stock's potential, recently.