Please ensure Javascript is enabled for purposes of website accessibility
Log In Help Join The Motley Fool
Free Article Join Over 1 Million Premium Members And Get More In-Depth Stock Guidance and Research
By Brian Feroldi – Feb 2, 2017 at 8:41AM

These three stocks offer up a nice combination of growth, value, and yield.

Dividend stocks have become a favored source of income in today's low-interest-rate environment. However, not all dividend stocks are created equally, which it why it's important for investors to be picky about which income stocks they choose to buy. Let's consider three dividends stocks -- AbbVie (ABBV -2.12%), Anheuser-Busch InBev (BUD -1.99%), and General Electric (GE -1.81%) -- that all offer up dividend yields of 3% or more and promise growth in the years ahead. Read on to learn more about each company and judge for yourself if any of them is deserving of a place in your portfolio. 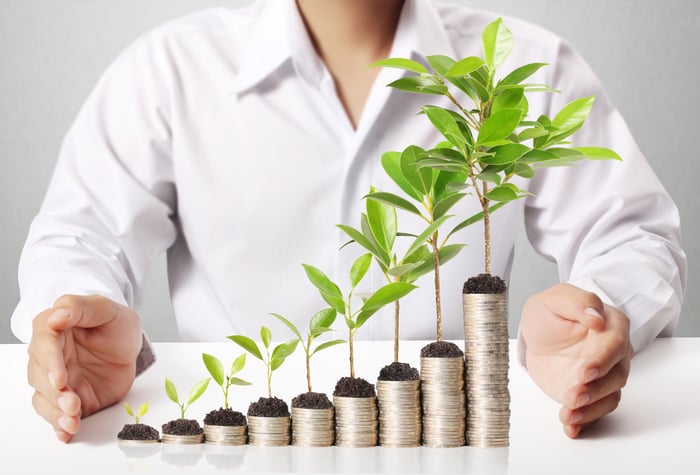 This big pharma is built for growth

Healthcare companies like AbbVie benefit from selling products that remain in demand no matter what's going on in the economy. Boasting a strong portfolio of top-selling drugs, AbbVie has been cranking out strong growth in revenue and profits for years.

Included in AbbVie's portfolio is Humira, a true cash-cow drug. Humira is used to treat a range of autoimmune diseases such as rheumatoid arthritis, Crohn's disease, plaque psoriasis, and more. Total Humira sales came in at $16 billion in 2016, which, impressively, was up by 16% year over year. When adding in stellar sales growth rates in other drugs, such as the cancer drug Imbruvica and the digestive aid Ceron, AbbVie's top and bottom lines each rose by more than 12%.

Given the strong growth rates, you might be surprised to see that AbbVie is trading for only 9 times forward earnings. That's because the markets are concerned that AbbVie is far too reliant on Humira. That makes sense, as the drug comprised roughly 63% of total sales. If something bad were to happen to Humira, AbbVie's investors would be in for a world of hurt.

While that's a risk to watch, analysts project that AbbVie's earnings will grow by more than 15% annually for the next five years. That's a compelling growth rate for a company that's trading so cheaply. Add in a dividend yield of 4.3%, and AbbVie offers up a solid combination of income, value, and growth.

The undisputed king of beer

If you're a beer drinker, the odds are good that you're a regular customer of Anheuser-Busch InBev, even if you don't know it. Beyond the obvious brands such as Budweiser and Busch, AB InBev owns dozens of other top-selling brands that you're probably familiar with, such as Corona, Hoegaarden, Stella Artois, Foster's, and many more.

Yet as big as this company already is, it recently became a whole lot bigger. AB InBev just completed its $100 billion megamerger with SABMiller, creating the world's largest brewing company. This industry giant is expected ring up more than $57 billion in annual sales next year and utterly dominate the global beer industry.

Despite its extremely strong market position and big potential for synergies, the markets haven't been kind to shares of AB InBev lately. The company's stock is currently more than 22% off its recent high after it reported weak third-quarter earnings that showed declining volume in the United States. The fall has pushed AB InBev's dividend yield above 3.2%, which is a number that should grab any income investor's attention.

While the craft-beer renaissance should continue to put pressure on volumes in North America, AB InBev should be able to offset that weakness with growing sales in emerging markets. When combined with price increases, market watchers are expecting profit growth in excess of 6% annually over the next five years. That gives shareholders a decent shot at earning double-digit total returns, which makes this a great stock to consider buying while it's on sale.

Not all that long ago, General Electric was a megaconglomerate that had its hands in a wide variety of businesses. Not anymore. GE has since sold or spun off a number of businesses and has returned to its industrial roots -- but with a twist. Instead of just being a traditional manufacturer, GE wants to be known as a "digital industrial company" that combines its software and manufacturing expertise to truly create next-generation products.

What kind of products is GE working on? Think gas turbines, jet engines, light bulbs, locomotives, and other industrial products that connect to the internet. When combined with a subscription to GE's Predix software, these new products will be able to run more efficiently and communicate potential maintenance issues, both of which promise to greatly lower operating costs. That should allow GE to steadily steal market share and substantially grow revenue from its high-margin software division. If true, then GE's bottom line looks well positioned for growth in the years ahead.

Market watchers believe that GE's bottom line will grow by more than 12% annually over the next five years. That's fast growth for a company that's trading for only 16 times forward earnings. Throw in a dividend yield of 3.2%, and GE looks like a stock that any income investor can learn to love.