Apple (AAPL -2.98%) is primarily a hardware company. Most of its revenue comes from the sale of iPhone, iPad, and Mac products. Beyond those key product categories, the company generates meaningful revenue from its Apple Watch family of smartwatch products, as well as from the various accessories, such as its well-received AirPod line of wireless earbuds. 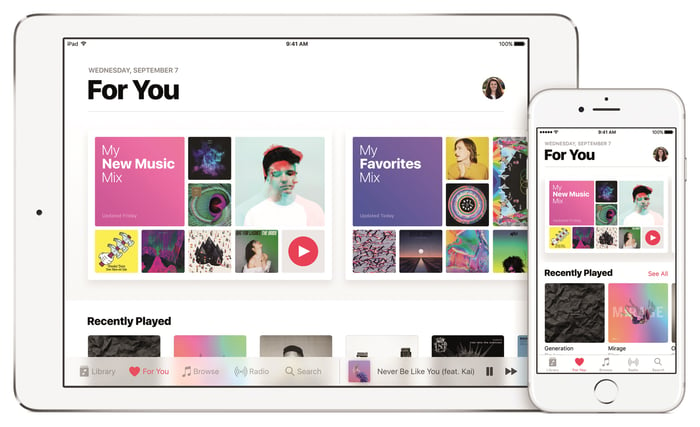 However, one of the most exciting parts of the company's portfolio is the services business, which the company says "includes revenue from Digital Content and Services, AppleCare, Apple Pay, licensing and other services."

This isn't a small business, either -- at least in absolute terms. It generated more than $24 billion in the company's last fiscal year, making up more than 10% of the company's consolidated revenue. To really put it into proper perspective, services was Apple's second-largest business by revenue in 2016 -- bigger than the iPad and Mac.

On the company's most recent earnings call, CEO Tim Cook made public the company's vision for services over the next four years, and it's quite ambitious.

"Services are becoming a larger part of our business, and we expect the revenues to be the size of a Fortune 100 company this year," Cook said.

Cook then went on to say that Apple "feel[s] great about this momentum" and that the company aims to "double the size of [its] Services business in the next four years".

Of course, what Apple's goals are and what happens aren't necessarily the same thing, but the fact that management is willing to put a growth figure out there -- a hard number that investors will now hold Apple accountable for -- speaks to the company's confidence.

What would a doubling of this business mean?

Put simply, doubling the business from the revenue levels seen in 2016 would mean that, by 2020, Apple's services business will be bringing in about $48 billion. If Apple can get the business to that scale and then grow it at a modest rate from that point forward (perhaps 5% to 10% annually), then that would do wonders for Apple's longer-term revenue growth prospects.

That said, as Apple scales up its services revenue, it will likely need to drive up operating expenses associated with the business, as well. While I do expect nice growth in profitability from a boost in services, the incremental gross profit isn't all flowing to the bottom line.

At the end of the day, if Apple hits its growth target with respect to this growing segment, it should be less dependent on the iPhone and could ultimately see earnings multiple expansion as software/services companies tend to be valued more by investors than pure hardware plays.