In just 12 months, shares of GW Pharmaceuticals (NASDAQ:GWPH) have shot up 125%. Over the past five years, the market cap of the cannabinoid-focused biotech has increased by well over 1,100%. Is GW Pharmaceuticals still a good pick for investors -- or is this hot marijuana stock just too expensive to buy right now? 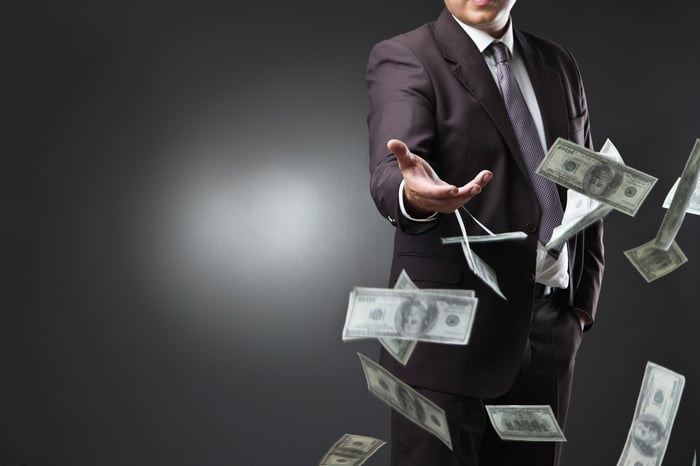 It's not that many doubt that Epidiolex will win regulatory approval. GW Pharmaceuticals announced results from three different late-stage clinical studies that found Epidiolex helped reduce seizure frequency in patients with Dravet syndrome and Lennox-Gastaut syndrome (LGS), both of which are rare forms of epilepsy. While there's always a possibility that the U.S. Food and Drug Administration (FDA) could turn down approval of the drug, Epidiolex's chances appear to be pretty good.

The bigger concern is that GW Pharmaceuticals won't make enough revenue from Epidiolex to justify its current market cap of just under $3 billion. Sativex, GW's first cannabinoid drug approved in 30 countries as a treatment for multiple sclerosis spasticity, hasn't been a huge financial winner so far. There's no guarantee that Epidiolex will be successful, either.

Analysts think that GW Pharmaceuticals will price Epidiolex somewhere between $30,000 and $60,000 for a year's supply. Since pharmacy benefits managers (PBMs) are doing everything they can to hold down the costs of high-priced specialty drugs, it seems realistic to expect significant push-back on the price of Epidiolex.

There's a solid bullish argument for GW Pharmaceuticals, though. First, any comparison of the relatively weak financial results for Sativex to prospects for Epidiolex is flawed from the outset. Sativex isn't approved in the large U.S. market, while GW is submitting for approval in the U.S. first with Epidiolex.

More important, there is currently no FDA-approved treatment for Dravet syndrome. If GW Pharmaceuticals gets a thumbs-up from the FDA for Epidiolex for the indication, the company should have a solid case for convincing payers to cover the drug. That should also be true for LGS also, since many patients are resistant to current medications.

In the U.S., there are an estimated 14,000 to 18,500 children with LGS. Around 5,000 U.S. children are affected by Dravet syndrome. Combined, the two indications give GW Pharmaceuticals a market size of up to 23,500 patients in the U.S. alone. If we assume the price tag of Epidiolex is at the mid-point of the range expected by analysts, that's a potential annual market of over $1 billion.

That level of annual sales makes GW Pharmaceuticals' current market cap look cheap. But the obvious objections are that the company won't get that high of a price for the drug and won't get all of those patients.

However, even if we assume Epidiolex's price is at the low end of the analysts' range -- $30,000, the company's market potential is still $700 million per year. As for the number of patients that might use Epidiolex, consider that many parents are currently paying significant amounts out of pocket for other treatments for their children (including medical marijuana). If GW gets the payer coverage it expects, it seems likely that a large percentage of these patients will use Epidiolex for financial reasons.

We also have yet to factor in another important consideration: the potential for Epidiolex in Europe. There are more children in Europe with LGS than there are in the U.S. -- perhaps up to 31,000.

Too hot or still heating up?

I don't think GW Pharmaceuticals' stock has finished its remarkable run. There's a good possibility that shares could go another 20% higher in 2017, in my view. Even at that level, I wouldn't say the stock would be overpriced based on the potential for Epidiolex.

The real test, though, will come in 2018. Assuming GW gains FDA approval for Epidiolex, the company should begin marketing the drug by summer of next year. That launch will likely tell the real tale about whether or not this marijuana stock was really as hot as it seemed.

Is This Hot Marijuana Stock Too Expensive to Buy? @themotleyfool #stocks $GWPH Next Article
Current