Please ensure Javascript is enabled for purposes of website accessibility
Log In Help Join The Motley Fool
Free Article Join Over 1 Million Premium Members And Get More In-Depth Stock Guidance and Research
By Brian Feroldi – Updated Jul 27, 2017 at 9:14AM

These three stocks promise fast growth for those daring enough to invest.

Every investor dreams of getting in on the next great growth stock. However, it can be quite difficult to invest in companies that promise extreme growth rates because they are often bid up to premium valuations that can make them quite risky to own. Still, fast growth can often flame out.

Regardless, it can be worthwhile to build a watchlist of potential multi-baggers. To help you do just that, I ran a screen to identify companies with the following characteristics:

Of the companies identified by the screen, three stood out to me as poised for exceptional growth: Paycom Software (PAYC 4.67%), T-Mobile US (TMUS 2.43%), and Dexcom (DXCM 7.08%). Are any of them worth buying today? Read on to learn more about these companies so you can make that call for yourself. 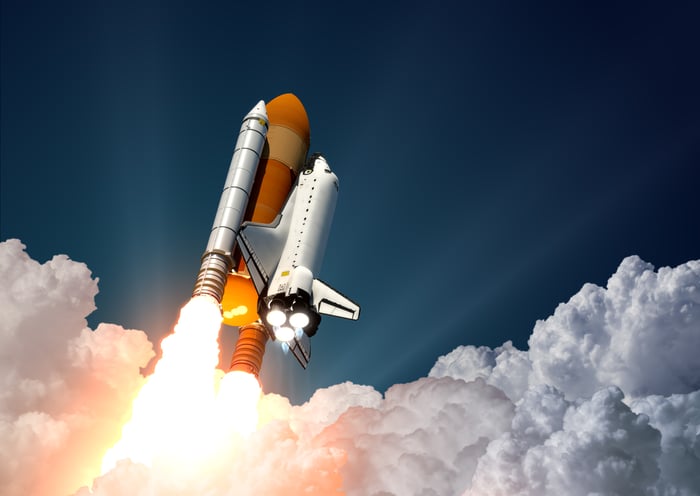 Payroll is a boring but mission-critical task for every business. The market for this service is mature and extremely competitive, but Paycom Software has been rapidly rising up in this industry since its founding in 1998.

What makes Paycom's product offering stand apart from more established competitors? First, Paycom's platform is provided exclusively through the cloud. That makes it easy to implement and access from anywhere. Second, Paycom offers far more than just simple payroll processing solutions. The company's platform is an all-in-one human capital management software solution that assists with many other HR tasks such as time management, performance reviews, recruiting, training, and more.

This unique combination is helping Paycom grow like wildfire. Revenue has grown by more than 40% annually over the past five years, which has allowed the company's bottom line to swell. Better yet, 98% of the company's revenue is recurring, which gives the company a predictable base to grow from. The only knock against Paycom is that Wall Street is aware of the company's potential and has priced its stock accordingly. Trading for nearly 65 times trailing earnings, Paycom stock is far from cheap, so if the company's growth engine stalls, shareholders could be in for a world of pain. Still, fast-growing stocks that are already profitable don't come along every day, so I think this is one growth stock worth paying up to own.

A wireless carrier with attitude

The U.S. wireless market is mature and dominated by AT&T and Verizon, so you'd be forgiven for assuming that there isn't any room for anyone else to grow. I thought so, too, which is why I was surprised to learn that T-Mobile showed up on my screen.

If you live in the U.S., then you are likely familiar with T-Mobile's "Un-carrier" messaging. The company has been calling out other wireless carriers for using hidden fees and charges to jack up their customers' bills. By contrast, T-Mobile promises customers great service, unlimited access to data, and transparent pricing terms that are free of hidden costs.

This simple messaging is clearly resonating with consumers -- T-Mobile has been steadily taking market share away from incumbent carriers for years. In fact, the company has gained over 1 million customers each quarter for more than three years running.

Looking ahead, T-Mobile has announced plans to expand its footprint by opening 1,000 new stores and making a bigger push into the business market. CEO John Legere is so confident that these moves will drive new customer growth that he recently made the bold statement that he expects to overtake AT&T in total phone customers in five years' time. If that prediction comes true, T-Mobile's investors look poised to reap substantial rewards from here.

Each year, Americans spend more than $176 billion treating diabetes, which is a chronic disease that affects more than 29 million Americans. Sadly, both of these figures continue to climb higher with each passing year.

Diabetes is a burdensome disease that requires patients to measure their blood sugar by pricking their finger on a daily basis. To help ease this burden, Dexcom launched a small medical device that is worn on the body and constantly measures blood glucose levels. Not only is this device far more consumer-friendly than traditional glucose monitors, it also allows patients to track their blood sugar in real time.

Patients and providers around the world have been flocking to Dexcom's solution for years, which has caused the company's revenue to soar: 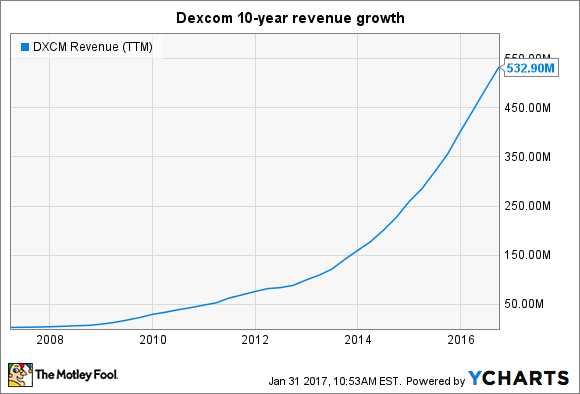 Amazingly, these extreme growth rates have been achieved without reimbursement access from Medicare. Thankfully, the Centers for Medicare & Medicaid Services recently announced that it was changing its policy and will begin offering coverage for Dexcom's G5 Mobile system. That's big news that promises to open up a massive new group of patients to Dexcom's system.

Like Paycom, the markets have caught on to Dexcom's growth potential and have awarded it a crazy valuation. Still, diabetes isn't going away anytime soon, and Dexcom looks well-positioned for fast growth ahead. Time could prove that paying up to own this company's stock is well worth it.

FDA Confirms There's No Evidence That Cell Phones Cause Cancer