Shares of Macy's (NYSE:M) spiked 7% higher on Friday after The Wall Street Journal reported that Hudson's Bay (TSX:HBC) had begun preliminary talks about acquiring the department store giant. This came just a day after rumors began to circulate that outgoing Macy's CEO Terry Lundgren was interested in selling the company. 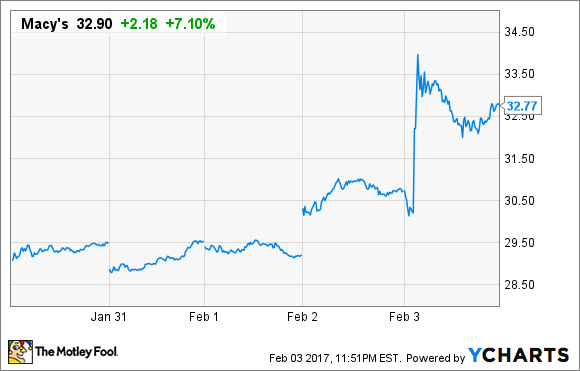 Many analysts have held up Hudson's Bay as a natural acquirer due to its recent history of buying up various department store chains with valuable real estate. However, Macy's would be by far its biggest purchase. Furthermore, Hudson's Bay doesn't bring anything unique to the table that would allow it to pay a big premium for Macy's.

Hudson's Bay has amassed a real estate gold mine

A key consideration in these deals has been real estate value. Most famously, Hudson's Bay acquired the Saks Fifth Avenue chain for $2.9 billion in 2013. A year later, the Saks flagship store was appraised at $3.7 billion.

More recently, Hudson's Bay has formed joint ventures with prominent real estate companies like Simon Property Group (NYSE:SPG). These joint ventures have allowed it to access some of the cash value of its real estate in order to pay down debt and fund further acquisitions.

True, Hudson's Bay stock popped after it got the shockingly high appraisal for Saks' flagship store and announced its big joint venture with Simon Property Group. Yet Hudson's Bay stock has plummeted just as much as Macy's stock in the past year and a half, reaching a new low a few weeks ago. 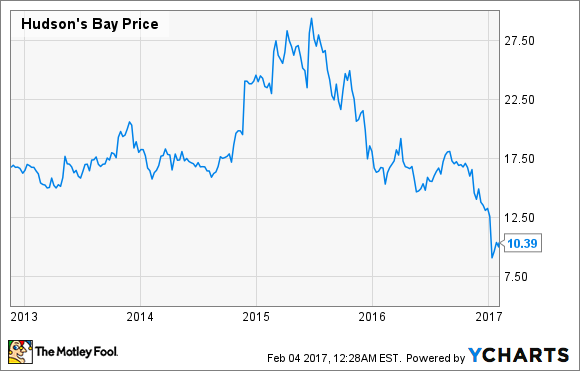 In the past few years, Macy's has followed its own real estate strategy of selling off (in whole or in part) properties that weren't generating enough income relative to their real estate value. In terms of results for shareholders, this has been no better and no worse than Hudson's Bay's more complicated strategy. The only difference is that Hudson's Bay may have a more patient investor base.

Macy's would be a big fish to swallow

Hudson's Bay's ability to finance a takeover of Macy's is also questionable. Its market cap is less than $1.5 billion, compared to more than $9 billion for Macy's. Including Macy's debt (about $7 billion) and a reasonable deal premium, the total acquisition price could balloon to more than $20 billion, way more than anything Hudson's Bay has acquired up until now.

Some commentators have suggested that Hudson's Bay could just use its $14 billion of real estate as collateral for a deal. Yet some of that real estate has already been mortgaged; other properties have been contributed to the joint ventures, so Hudson's Bay doesn't own them outright anymore.

Instead, Hudson's Bay would probably need to use Macy's properties as collateral for a buyout. But if the acquisition is to be funded primarily with Macy's own assets, it would be natural to wonder whether Macy's shareholders are just being ripped off.

Hudson's Bay's weak profitability indicates that it's no better than Macy's -- and perhaps worse -- at running a department store. Furthermore, Hudson's Bay wouldn't bring any meaningful scale improvements to Macy's; its U.S. operations are about a fifth of Macy's size right now.

Thus, any value creation would have to come from making better use of Macy's real estate. Yet there is little that Hudson's Bay can do that Macy's couldn't do by itself.

For example, some analysts have suggested that Hudson's Bay could contribute some of Macy's properties to its joint venture with Simon Property Group in exchange for cash to help finance the acquisition. However, Macy's could probably just deal directly with Simon instead.

Indeed, Macy's -- including sister chain Bloomingdale's -- has about 100 stores in Simon malls and Macy's owns many of those stores outright. This would form an obvious basis for a future joint venture or other real estate deal. (Macy's also has a huge presence in malls owned by GGP.)

If Macy's concludes that Hudson's Bay has a superior real estate strategy, it should be possible to mimic that strategy. The only way that acquiring Macy's could make sense for Hudson's Bay is if Macy's management is so desperate to sell that it would accept a lowball offer.