It's been a few years since Facebook (NASDAQ:FB) started disclosing the percentage of its ad business that was being generated on mobile platforms. It started at a mere 3% way back in the second quarter of 2012, but has steadily and consistently risen to become the overwhelming majority of ad revenue. We're now talking about 84% of ad revenue coming from mobile -- flat sequentially in percentage terms, but up in dollar terms, as overall ad revenue just hit a record $8.6 billion.

As Facebook becomes increasingly mobile, this is easily one of the most important metrics for investors to keep track of (both in percentage terms and dollar terms).

For starters, here's the percentage of ad revenue coming from mobile going back to when the social network started reporting it. 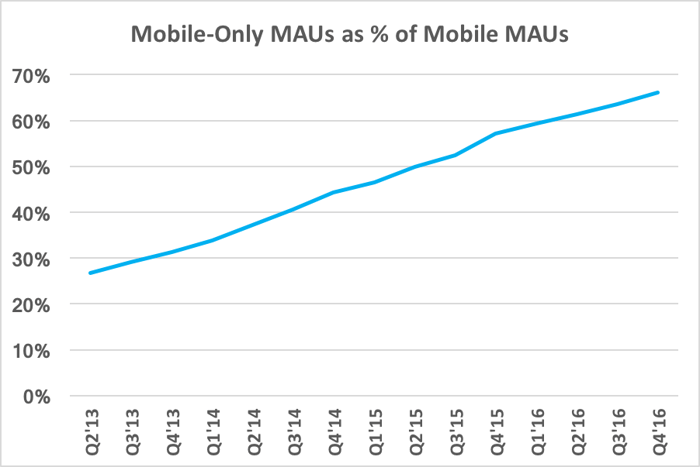 That translates into $7.2 billion in mobile ad revenue last quarter. I noted in November that Facebook's mobile ad business was on the verge of crossing the $20 billion threshold on a trailing-12-month basis. Well, it just did, and the company's mobile ad business is now a $22.5 billion business. 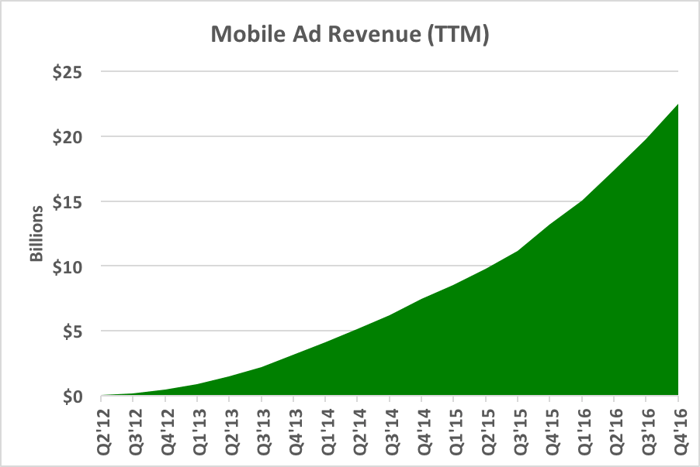 If you look at Facebook's desktop ad business these days, it's pretty boring. Not in a bad way; it's stable and reliable revenue is coming in, but not growing meaningfully. Desktop ad sales over the past year have been $4.4 billion, or about a fifth of the mobile ad business. Facebook very much relies on mobile platforms to pay the bills, and the good news is that the company continues to execute on growing mobile ad sales by improving monetization alongside a growing user base.

There's also another important and related trend worth acknowledging here: the increasing proportion of Facebook's mobile monthly active users (MAUs) that exclusively access the service through mobile. Facebook refers to these as mobile-only MAUs, and there were 1.15 billion of them last quarter. In percentage terms, that's fully two-thirds of all mobile MAUs. Three years ago, this figure was less than a third.

This progress with transitioning to mobile has been incredibly impressive, particularly within the context of all the skepticism that surrounding Facebook's ability to do so shortly after going public. Facebook has successfully silenced the critics, and earned some credibility with what comes next -- namely, continued monetization momentum with younger services like Instagram and WhatsApp and the bet that virtual reality becomes the next computing platform.