Shares of Omnicom Group (NYSE:OMC) fell modestly on Tuesday after the marketing and communications company reported fourth-quarter 2016 results. Similar to its past several quarterly performances, Omnicom's revenue and earnings crept higher on a year-over-year basis as organic growth continued to help the company weather currency and macroeconomic headwinds.

Let's take a closer look, then, at both how Omnicom closed the year and what to expect on the road ahead. 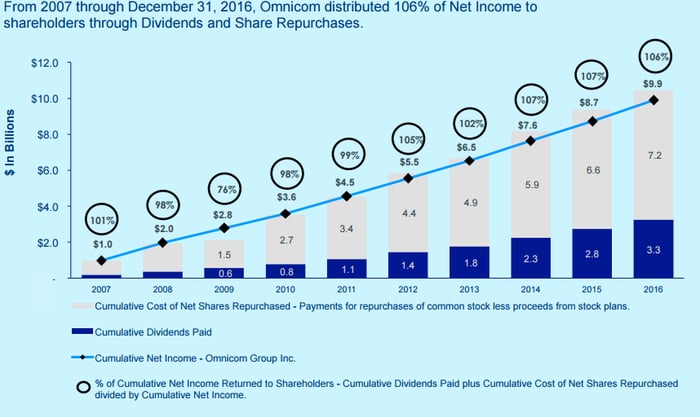 We were very pleased with our performance for 2016. Strategically, we remain focused on growing and developing our talent, investing in new businesses, and expanding our capabilities in digital, data and analytics, making strategic acquisitions to better service our clients, and continuing to execute on internal organization, operational and diversity initiatives. The results of our strategies are reflected in our solid financial performance for the year. We achieved our target for organic growth, exceeded our margin target, and delivered earnings-per-share growth for the year of 8.4% or $4.78 per share.

Later in the call, Omnicom CFO Phil Angelastro echoed his sentiment from last quarter, stating that "the continued weakening of the British pound after the Brexit vote in late June remained a significant drag" and reduced revenue by an estimated $75 million during the fourth quarter. Angelastro also noted that Omnicom endured an increase in volatility of foreign currency markets following the U.S. presidential election in November.

Recall that Omnicom doesn't typically provide specific financial guidance. But Angelastro did suggest that, assuming currencies stay constant -- an admittedly "highly speculative" assumption -- foreign exchange would have a negative impact of roughly 1.25% in both the first quarter and full year of 2017. In the meantime, the company will "continue to reevaluate [its] portfolio of businesses and focus on opportunities for growth."

All things considered, there were no big surprises in Omnicom's report today. And as long as the company continues to weather today's tough business environment, while focusing on driving growth in the areas within its control and rewarding shareholders with ambitious capital returns, I think investors should be more than happy with where it stands.