Please ensure Javascript is enabled for purposes of website accessibility
Log In Help Join The Motley Fool
Free Article Join Over 1 Million Premium Members And Get More In-Depth Stock Guidance and Research
By Reuben Gregg Brewer – Feb 7, 2017 at 9:05AM

Shares of McEwen Mining Inc. (MUX 7.68%) moved 21% higher last month. That follows a gain of nearly 175% in 2016. However, January's gain represents something of a performance reversal. Indeed, investors watched McEwen stock rally more than 325% by mid-2016 only to see those gains fall away through the second half. With one month down in 2017, commodity prices are again pushing the stock higher.

Gold prices rose around 5% last month, with silver advancing a bit more, at nearly 8%. That was a clear positive for McEwen's stock price. Although precious-metals prices are likely to have an outsize impact on the miner's share price, there was more going on than just a silver and gold move last month.

For example, on Jan. 16, McEwen announced that it produced roughly 145,500 gold equivalent ounces in 2016. That metric puts gold and silver production on equal footing, and it also beat the company's internal production forecast of 144,000 ounces. So the company was able to exceed a key guidance target, which is a clear positive.

However, that release also noted that during the year, McEwen doubled its liquid assets -- made up of cash, marketable securities, and precious metals -- to $64 million. And it continues to have no debt on the balance sheet. In other words, it's in pristine financial health, with cash to invest back into two development projects it's working on -- Gold Bar and El Gallo Silver. 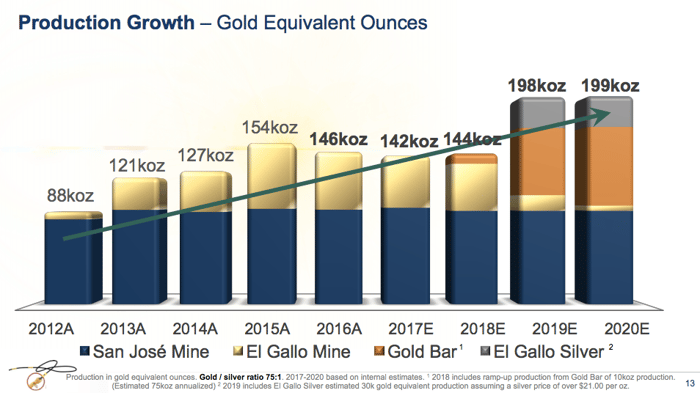 McEwen is a small precious-metals miner, but it's financially solid and successfully meeting the public goals it sets for itself. More important, it's benefiting from rising precious-metals prices at a point when it's working on the key growth projects that will underpin its future. There's a lot to like about McEwen from a fundamental point of view. Still, gold and silver prices will continue have an outsize impact on performance. Just don't let that distract you from the work being done to build a foundation for the future.