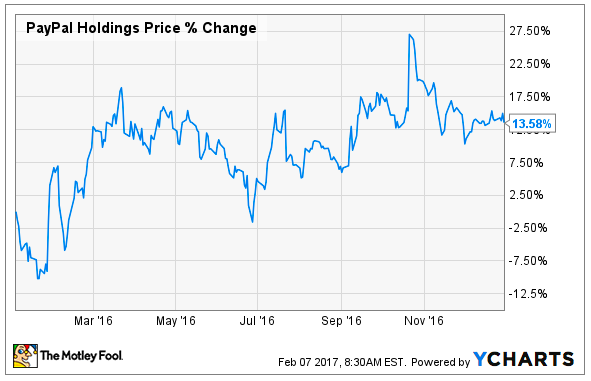 PayPal's stellar year started when it posted fourth quarter earnings in January, showing new customer growth of 6.6 million. That brought total customers up to 179 million and was the largest quarterly addition in its 17-year history. By the end of the year, PayPal had accumulated 197 million active customer accounts.

Customer growth is great to see, but investors were even more pleased with PayPal's growing total payment volumes (TPV). TPV refers the amount that PayPal's customers are spending each quarter, and the company ended Q3 2016 with TPV of $87 billion, up 25% year over year.

But investors started to get excited about PayPal starting in September, when the company announced a new partnership with MasterCard. The deal allowed Masterpass to become a payment option for PayPal's Braintree merchants, and in turn helped PayPal increase volume transactions at more point-of-sale locations.

The enthusiasm continued into October, when PayPal managed to significantly grow its top line once again. Revenue in Q3 2016 grew by 18% year over year, to $2.67 billion. The important takeaway for investors was that PayPal revenue grew for seven straight quarters, and the company expanded its TPV over the past 11 quarters, since spinning off from eBay.

Part of that growth has been spurred on by the success of its peer-to-peer payment app, Venmo. The app processed $4.9 billion of TPV in the third quarter, up 131%, and shows no signs of slowing down.

2017 is already shaping up to be a great year for PayPal as its Q4 2016 earnings a few weeks ago revealed a revenue increase of 17% year over year to $2.9 billion and a jump in TPV of 22% to $99 billion. The company now has a total of 197 million active customers, despite rising competition.

So far, PayPal is staying one step ahead of the competition through its Venmo app and its One Touch system, which allows customers to easily pay for things on online merchant websites. PayPal expects full-year 2017 revenue to grow by 15% to 17%, and if can continue expanding TPV and total customers, then investors have much more to look forward to this year.