SodaStream (NASDAQ:SODA) has been riding a wave of good news that has pushed its shares steadily higher since it reported Q3 earnings in November. That upward trend continued through January when the company's stock price rose despite the lack of any news.

That was enough to set off a steady increase in the company's share price. That continued in January as the stock opened the month at $39.50 shares climbed throughout January to close the month at $43.99, an 11% increase according to data from S&P Global Market Intelligence. 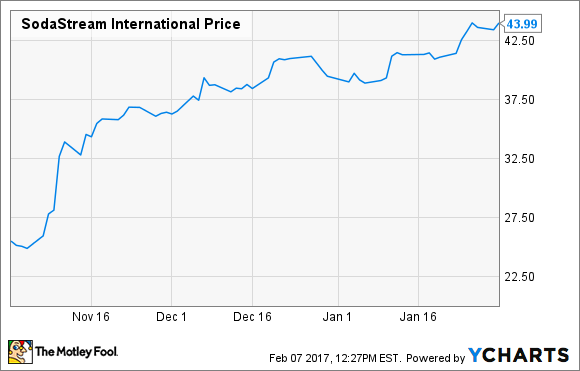 It's not just that SodaStream had a good quarter, but that those results do not seem like a fluke. Instead the company's business appears to have turned a corner.

"Our top-line performance included a 23% increase in sparkling water maker unit sales to 788,000, our highest quarterly figure in nearly two years, underscoring the growing strength of our business," CEO Daniel Birnbaum said in the earnings release. "We believe that repositioning the SodaStream brand around sparkling water combined with effective marketing programs is setting the foundation for an acceleration in household penetration in each of our geographic regions."

More machines being sold not only improves one quarter, it increases the company's base. That generally means higher sales of accessories going forward.

SodaStream reports its year-end results Feb. 15 and it needs to show continued momentum in order to justify the confidence investors have shown. The company appears to have turned a corner and its Q3 numbers back that up, but a step back in Q4 could wipe out these gains.

Of course, there's no reason to expect that and the company has been adding to its installed user base. That's likely to continue to help it push sales and profits higher (in general accessories and drink mixes are higher margin than machines).