Nordstrom's market cap has fallen to just $7.4 billion. The Nordstrom Rack off-price chain alone could be worth that much.

Investors have fallen in love with off-price retailers over the past five years. Shares of TJX (TJX 1.65%) and Ross Stores (ROST 2.23%) have both more than doubled over that period. But one top off-price retailer has been left out of the fun: Nordstrom (JWN 0.54%) subsidiary Nordstrom Rack. Shares of Nordstrom have declined slightly since 2012. 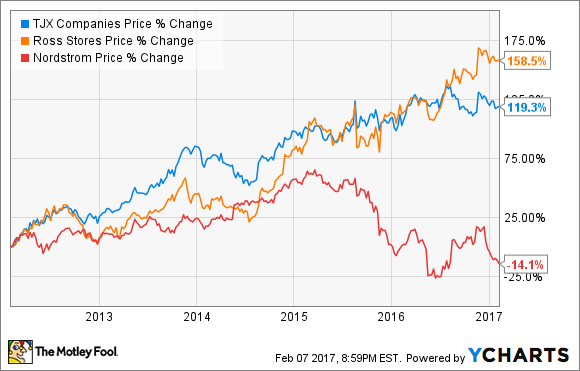 A rare outpost of steady growth

It's not especially surprising that investors have driven shares of TJX and Ross Stores higher in recent years. Whereas most brick-and-mortar retailers have struggled to cope with the rising threat from e-commerce, off-price retailers seem to have a more "disruption-proof" business model.

Both companies also continue to open new stores at a steady pace. As a result, they routinely post high-single-digit revenue growth. Furthermore, TJX and Ross Stores maintain strong margin profiles, with pre-tax margins in the 12%-13% range.

What about Nordstrom Rack?

Nordstrom Rack hasn't been posting robust comp sales growth recently -- at least in its stores. In-store comp sales for the Rack chain declined 1% in fiscal 2015 before improving modestly in the first three quarters of fiscal 2016.

Furthermore, Nordstrom has expanded the Rack chain by about 80% in the past four years, going from 119 locations in early 2013 to 215 today. This has also weighed on comp sales, as the rapid addition of new stores has cannibalized sales from existing ones. On the other hand, it has allowed Nordstrom Rack to grow its in-store sales by more than 50% since 2012, outpacing the growth of TJX and Ross Stores.

It's harder to evaluate Nordstrom Rack's profitability, as Nordstrom doesn't offer any breakdown of its earnings between the full-price and off-price formats. Still, based on Nordstrom's poor overall profitability, it's safe to say that Nordstrom Rack has lower margins than TJX and Ross Stores right now.

That said, the combination of too much inventory and aggressive growth over the past few years has prevented Nordstrom Rack from performing up to its full potential. Nordstrom is slowing its Rack store growth now. It has 15 new stores planned for 2017, which would represent 7% growth, although that could still change modestly.

If Nordstrom can get the Rack business back on track, it could be extremely valuable. Top off-price company TJX trades for 1.5 times trailing sales. Ross Stores, which is somewhat smaller, trades for an even loftier 2 times sales.

Over the past four reported quarters, Nordstrom Rack generated $3.74 billion of in-store revenue. Even at 1.5 times sales, that would value this business segment at $5.6 billion. At 2 times sales -- which might be warranted based on Nordstrom Rack's faster growth relative to TJX and Ross Stores -- the chain would be worth about $7.5 billion. (This doesn't put any value on Nordstrom's off-price e-commerce business, because it's barely profitable right now.)

Meanwhile, the whole company has a market cap of just $7.4 billion and an enterprise value of $9.7 billion. In other words, either Nordstrom Rack is being dramatically undervalued, or the larger full-price business is being treated as if it were nearly worthless.

The full-price business is certainly not worthless. It continues to generate plenty of free cash flow despite weak sales. Furthermore, Nordstrom's real estate alone is worth billions of dollars.

As Nordstrom Rack improves its performance -- and grows to represent a larger proportion of the company -- investors will realize that it is a big growth engine hidden by the ups and downs of the full-price business. That should drive Nordstrom stock significantly higher.