In response to announcing disappointing fourth-quarter results and issuing downbeat guidance for 2017, shares of biotech giant Gilead Sciences (NASDAQ:GILD) fell as much as 10% in early morning trading on Wednesday. The drop has wiped away more than $9 billion from the company's market capitalization.

Gilead fourth-quarter earnings report was loaded with disappointing news. Revenue fell by 15% to $7.3 billion. Meanwhile, spending on research and development rose by 60%. The combination caused adjusted EPS to decline by 19%. 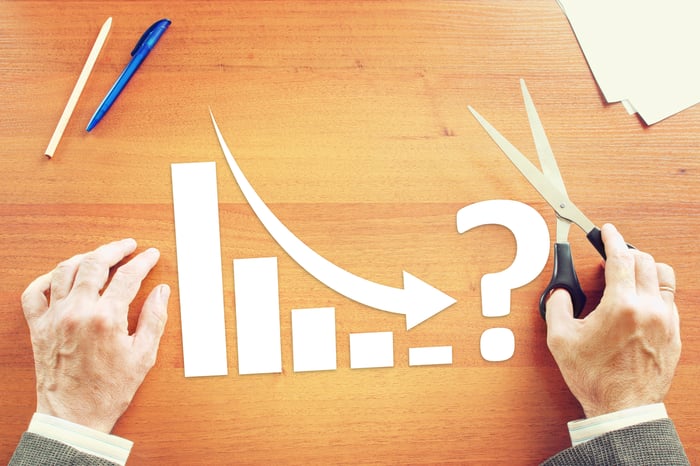 While Gilead's quarterly results were not great, management's outlook for the year ahead appears to be a far bigger cause for concern. Full year net product sales are only expected to land between $22.5 billion and $24.5 billion. Not only does this range represents a drop of nearly 22% at this midpoint, but it also is a far cry from the $26.3 billion in revenue that Wall Street was expecting.

A closer look at this forecast also provides reason for worry. Gilead projects that Hepatitis C (HCV) sales -- that includes Sovaldi, Harvoni, and Epclusa -- will land between $7.5 billion to $9 billion. For perspective, this figure was $14.8 billion in 2016.

To add insult to injury, Gilead is projecting that revenue from non-HCV product sales will come in between $15 billion and $15.5 billion. This figure was just shy of $15 billion for all of 2016, so this forecast represents minimal growth year-over-year.

Given the torrent of bummer news, it is no wonder why shares are tanking today.

While the overall takeaway from this report is clearly negative, there were a handful of positives that are worth pointing out. Gilead's spending may be on the rise, but the company is doing so in order to advance its promising pipeline. Currently, Gilead has 28 clinical studies in progress, 10 of which are in late-stage trials. That fact should give investors some comfort that this company is investing in its future.

Gilead also continues to have a war chest of cash at its disposal. The company ended 2016 with more than $32 billion in cash on its books, which give its plenty of ammo to buy back stock or make a sizable acquisition (or two).

Finally, income investors will likely be delighted to hear that the company raised its dividend by 10%. Its new quarterly payout of $0.52 per share gives shares a yield of more than 3% at current prices.

Make no mistake -- the negatives from this report more than canceled out any of this good news. With revenue and profits expected to decline for the foreseeable future, it is hard to imagine why the markets would turn bullish on this stock until the company can put its cash hoard to work. With no news on that front, the waiting game continues.