President Donald Trump's @POTUS Twitter feed sounded off in celebration on Jan. 25 when the Dow Jones Industrial Average reached 20,000 for the first time ever, just five days after his inauguration:

The administration was right to celebrate what has been a very bullish market rally following the election results on Nov. 8. The market reacted bearishly to the unexpected results on election night, but ever since then, it's been on the rise.

However, the Dow's 9%-plus rise since Election Day is just a fraction of how much the stock market rose during President Obama's eight-year tenure. It's very early in the Trump administration, but can we predict whether the market will perform better or worse under President Trump than under President Obama? 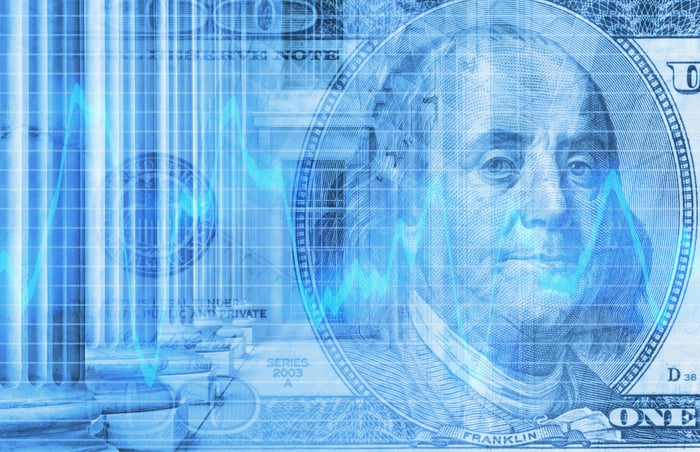 The chart below shows how the Dow Jones Industrial Average has performed during the terms of the last 10 presidents, all the way back to when Lyndon Johnson took office in 1963 (the black arrows mark the year in which each president was first elected): 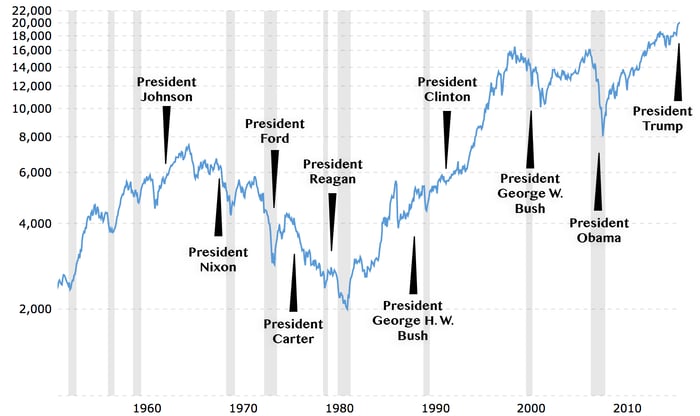 Now let's put that in terms of total market returns under each president:

Obama took office at the tail end of the Financial Crisis. Even though the administration enacted policies that would typically seem to limit the earnings ability of some corporations within the Dow, such as stricter reporting regulations, the market rose handily (in percentage terms) during his eight years in office. Setting aside any economic policies the Obama administration enacted, the fact that President Obama took office near the market's trough meant that the market, which is cyclical in nature, had a much stronger chance of rebounding during his tenure.

Meanwhile, Trump assumed the presidency after an eight-year-long bull run that saw no sustained corrections. History shows that corrections happen at somewhat regular intervals, and many market analysts believe one is due soon. Based on how market the cycle has worked through recent decades, it seems unlikely that we'll see consistent growth during President Trump's tenure -- but, of course, it's not impossible.

What business leaders are saying

Many business leaders have been speaking optimistically of Trump's proposed financial policies in their earnings calls. Cisco Systems (NASDAQ:CSCO) CEO Chuck Robbins said during the company's fiscal first-quarter earnings call in November, "I think President-elect Trump appears to be very business-oriented and is very focused on driving the U.S. economy, and anytime the U.S. economy improves that's certainly good for us."

Southwest Airlines (NYSE:LUV) is another company that is looking forward to lower taxes and less regulation. In the most recent earnings call, CEO Gary Kelly finished answering an analyst question about upcoming policy changes by saying:

"We've looked at the tax reform proposals and we're quite excited about that on the corporate front, but that's just about income tax. So that doesn't really speak to the very heavy burden that we have for aviation taxes, which we also want to take up with the administration. So, that's a long answer to your question and I think the bottom line is: No, we don't know anything specific yet, but we sure like what we're hearing so far."

Of course, there's also rising concern among many CEOs and other business leaders about how certain policies that have been floated or initiated could negatively affect their businesses or the broader economy. These include tariffs on imported goods and the controversial executive order restricting travel to the U.S.

Apple (NASDAQ:AAPL) management has said positive things about potential tax cuts, especially those related to repatriating cash kept overseas, of which Apple has around $200 billion. However, Apple is also one of the biggest companies that in recent weeks have come out against Trump's immigration policy. And it is one of many companies taking legal action against Trump's immigration stance, citing (along with moral opposition) concerns that it could ultimately damage the company financially.

How to invest during a Trump presidency

The Dow Jones' average price-to-earnings ratio is currently around 20 -- relatively high by historic standards. Additionally, you can probably expect politics, and the market's reaction to them, to be volatile in the months and years ahead. Nonetheless, that shouldn't scare away investors. As the investing proverb goes: Time in the market is more important than timing the market.

Regardless of how you believe the stock market will perform based on cyclicalty or political volatility -- barring a massive shift in policy that derails corporate earnings ability, or a major economic disaster resulting from an environmental, social, or defense crisis -- you should note that the market performance graph above has marched upward over the long term.

As a long-term investor, you should continue to look for valuable investments to buy and hold while also watching the economic and political climate closely. And whatever you do, remember that your investment horizon should be greater than four -- or even eight -- years.