Shares of Southwestern Energy (SWN 4.63%) sank last month, dropping nearly 10%, primarily due to a similar decline in the price of natural gas.

Natural gas cooled off to start the year after weather prognosticators predicted that warmer temperatures were on the horizon. In fact, the price of gas fell nearly 10% in one day in early January -- one of its worst trading days in almost three years -- after forecasters expected that an arctic blast would be shorter than anticipated.

That warm-up seemed to send a chill down the spine of an analyst at Bank of America Merrill Lynch, who downgraded the stock from neutral to underperform while slashing the bank's price target from $16 to $9. The analyst also cited the company's valuation, which already reflected its recent restructuring efforts. That one-two punch sent investors rushing out of Southwestern's stock. 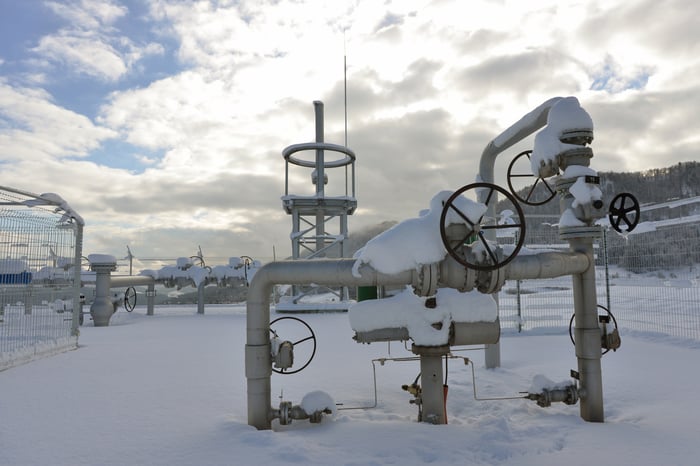 That said, not all analysts agreed. UBS, for example, upgraded Southwestern Energy's stock from sell to neutral, saying that the concerns that prompted its sell call were no longer a problem; instead, the company's improving balance sheet would allow it to return to growth mode. Barclays, likewise, thought the sell-off was overdone, and upgraded the stock from underweight to equal weight. The bank also upgraded natural-gas-producing peer Cabot Oil & Gas (CTRA 4.51%) citing improving natural-gas market fundamentals. Furthermore, the bank liked the fact that both companies were growing production, with Southwestern expected to boost output 11% this year, while Cabot Oil & Gas increased its 2018 growth forecast by 10%.

Those improving market fundamentals, however, did not keep the price of gas from tumbling at the end of the month, again on fears that warmer-than-normal temperatures were on the way. That pushed gas prices down double digits for the month, closing at a two-month low, further weighing on Southwestern's stock price.

Investors had hoped that the weather would return to normal this winter, which would drive up demand for gas and take prices up with it. However, those cooler temperatures have not materialized, which has investors concerned that producers will pump out too much gas, especially given that Southwestern Energy and Cabot Oil & Gas are ramping up output. Those rising supplies, when met with lackluster demand, could cause producers to generate less cash than hoped -- which could prove problematic for Southwestern, because its balance sheet still isn't in top form.