Please ensure Javascript is enabled for purposes of website accessibility
Log In Help Join The Motley Fool
Free Article Join Over 1 Million Premium Members And Get More In-Depth Stock Guidance and Research
By Jeremy Bowman - Updated May 25, 2017 at 5:02PM

E-commerce was supposed to be cheaper than operating a retail store, the traditional thinking went. Online sellers can save money by avoiding pricey commercial rents and a staff devoted to assisting customers.

Despite the conventional wisdom, that hasn't always been the case, and shipping costs are a primary reason why.

Amazon.com (AMZN 3.53%) spends billions more on shipping than it brings in in charges and fees, and many brick-and-mortar retailers have complained that e-commerce sales, though accretive to overall revenue, come with a lower margin than in-store sales. With networks of stores across the country, incremental sales in stores cost those retailers almost nothing in operating costs, but each e-commerce sale needs to be picked, packed, and shipped. 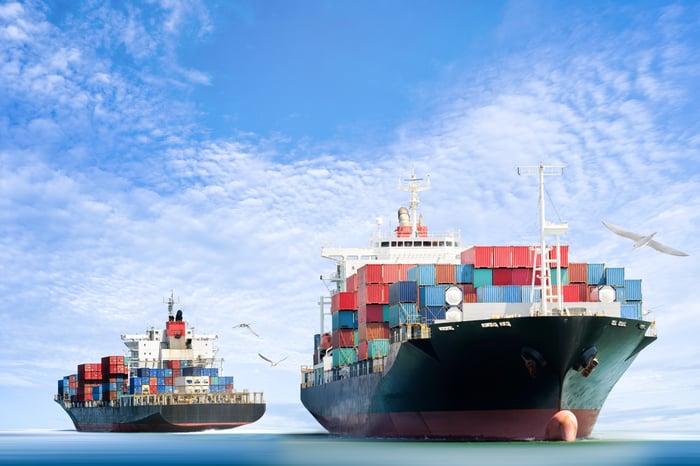 For Amazon, shipping costs have long been a concern for the company. In recent years, Amazon has made efforts to diversify its logistics capabilities, entering into a contract to lease 20 cargo planes last year, recently handling its own ocean freight, and also building a $1.5 billion airport hub in Cincinnati. The company sees those investments as necessary to handle spikes in demands that can overwhelm its shipping partners like FedEx, UPS, and the US Postal Service, especially after thousands after deliveries arrived late for Christmas in 2013. As its retail sales grow by more than 20% a year, it seems logical that the company will have to take more of its logistics under its control.

However, as Amazon's sales have skyrocketed so too have its shipping costs. Those expenses reached $16.2 billion last year, a 40% increase from the year before and accounted for nearly all of the company's $17.6 billion in fulfillment expenses, its biggest line item after cost of sales, or what Amazon pays for the goods it sells. During the same time, net shipping costs, which subtract revenue from shipping fees along with a portion of Prime membership fees, surged 43% to $7.2 billion, outpacing overall e-commerce sales growth of 24.9% last year. That was the fastest growth in net shipping costs since 2011.

Let's take a closer at Amazon's shipping costs to see what investors can expect in the coming years.

Amazon has stepped up efforts to make shipping even faster and more convenient for its customers. It now offers its Prime Now service with delivery in as short as an hour in 40 cities worldwide, and has more than 60 million Prime members in the U.S. according to some estimates.

And the recent expenditures are evident based on the explosion in shipping costs last year.

The charts below may offer a clearer picture of how shipping costs are affecting Amazon's bottom line.

Note: Figures do not include expense for stock-based compensation. 2010-2012 figures include AWS.

As the charts above show, shipping costs as a percentage of revenue have been relatively steady in recent years, although there was an uptick last year. The second chart also shows that operating income has surged in the last two years despite rising shipping costs. That seems to indicate that Amazon is executing its business objectives effectively -- and that rising shipping costs are one consequence of that growth, even if they have not been substantial enough to derail its overall profit growth.

For investors, the lesson is clear. While net shipping costs demand some attention, especially as they are set to top $10 billion this year, they are only one part of the larger business story here. Amazon, after all, is not a shipping company but an e-commerce business, and absorbing shipping costs is a necessary component of growing its business as it meets surging demand.