Verizon Communications' (NYSE:VZ) stock price jumped 16.37% in 2016 according to data provided by S&P Global Market Intelligence on strong customer gains throughout the year as investors looked for safe stocks to invest in among some global economic uncertainties. 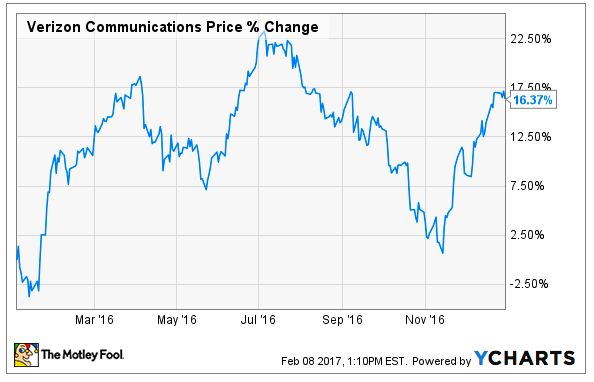 The stock price started ticking up toward the beginning of the year leading up to Verizon's fourth-quarter 2015 results, reported at the end of January 2016. The company's revenue grew by only 3.2% on a year-over-year basis to $34.25 billion, but it made strong gains in customer growth, adding 1.5 million wireless subscribers in the quarter. Additionally, postpaid churn rate (the rate at which customers leave) was just 0.96%.

Verizon's stock price suffered several setbacks throughout the year, mainly due to an employee strike and news of several hacking instances at Yahoo, which Verizon is currently in the process of buying.

But it was likely the company's overall stability, and its 4% dividend yield at the time, that kept investors interested in the stock. The company's slow and steady growth has been paired with its increasingly strong network position, which was shored up this past year when Verizon purchased the fiber optic company XO Communications.

In 2017, investors will be looking for more details on the final terms of the Yahoo deal, which is expected to close later this year, and for Verizon to successfully test its 5G network and implement its XO Communications purchase to further enhance its network.