A much discussed area in technology these days is artificial intelligence, a type of machine learning. Artificial intelligence is a workload that requires an immense amount of processing power, which is why companies like microprocessor giant Intel (NASDAQ:INTC) -- a company that brings in tens of billions of dollars from sales of processors -- see this market as an interesting long-term growth opportunity.

Interestingly, although Intel is a major supplier of processors for artificial intelligence workloads, the company doesn't get nearly as much attention for its efforts in this market as does graphics specialist NVIDIA (NASDAQ:NVDA) -- a company that has seen significant revenue and profit growth from artificial intelligence applications as its long-term investments in this space are paying off.

Intel went over its artificial intelligence strategy at its Feb. 9 investor meeting. Let's look at what the company had to say about the market and how it plans to win in it.

Artificial intelligence is small today, but...

According to Intel, only 7% of server sales in 2016 were used for artificial intelligence workloads, but it is the "fastest-growing data center workload."

Within that 7%, the company says that 60% of those servers were used for "classical machine learning" while the remaining 40% were used for "deep learning."

The company then went on to show that of the servers used for classical machine learning, 97% used Intel Xeon processors to handle the computations, 2% used alternative architectures, and 1% used Intel processors paired with graphics processing units (likely from NVIDIA).

Among servers used for deep learning applications, the chipmaker says that 91% use just Intel Xeon processors to handle the computations, 7% use Xeon processors paired with graphics processing units, while 2% use alternative architectures altogether.

The point that Intel is trying to make is that its chips overwhelmingly dominate the market for servers that run artificial intelligence workloads today.

Intel clearly views graphics processors from the likes of NVIDIA as a threat to its position in the artificial intelligence market -- a reasonable viewpoint considering that NVIDIA's data center graphics processor business continues to grow at a phenomenal rate (revenue was up 145% in the company's fiscal year 2017).

Intel's strategy, then, appears to be to cast a very wide net with a wide range of different architectures and hope that it can offer better solutions for specific types of artificial intelligence workloads than the graphics chipmakers like NVIDIA can. 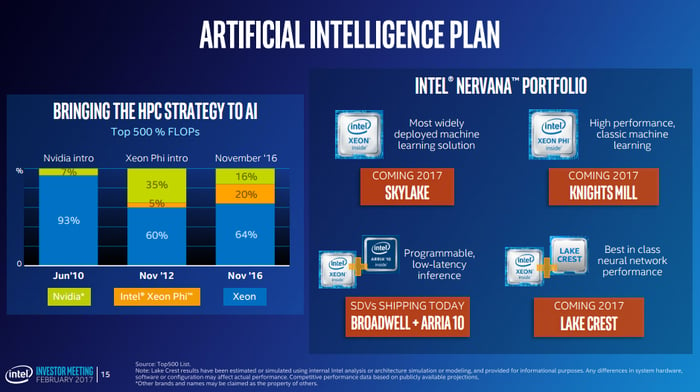 Look at the slide above and you'll notice Intel has different solutions for different types of workloads. It's promoting its next-generation Xeon processor (known as Skylake-EP) as the standard, general-purpose artificial intelligence processor.

From there, the offerings get more targeted. For some workloads, it will offer a specialized version of its Xeon Phi processor called Knights Mill. For others, it's going to offer combined Xeon processor with Field Programmable Gate Array (FPGA) chips. And, for still others, the company plans to offer a chip that combines a Xeon processor with a specialized deep learning chip called Lake Crest (based on technology that Intel acquired when it picked up start-up Nervana Systems).

Intel's strategy looks as solid as it can possibly be as it seems to be throwing its entire technical arsenal at the problem -- I'd say the company is well positioned to profit from the continued proliferation of artificial intelligence workloads.

What will only become evidence in time, though, will be how much market share Intel will ultimately be able to capture in this market. The underlying market growth should mean that Intel's revenue and profits here will grow, but obviously, the magnitude of that growth will depend on its ability to defend its market share while at the same time defending its average selling prices.