Merck's verubecestat becomes the latest casualty in treating Alzheimer's disease. Is there any hope in sight for this dreaded disease?

And another one bites the dust.

Merck (MRK 1.23%) announced on Tuesday that it was halting a phase 2/3 clinical study of verubecestat in treating Alzheimer's disease. This news marked the second major clinical failure in recent months by a big drugmaker for a disease that still has no effective treatment. Eli Lilly (LLY 4.12%) reported disappointing results for solanezumab in treating Alzheimer's disease in November.

Why are these drugs proving to be ineffective? And is a pipeline candidate with a real shot at beating Alzheimer's disease anywhere in sight? 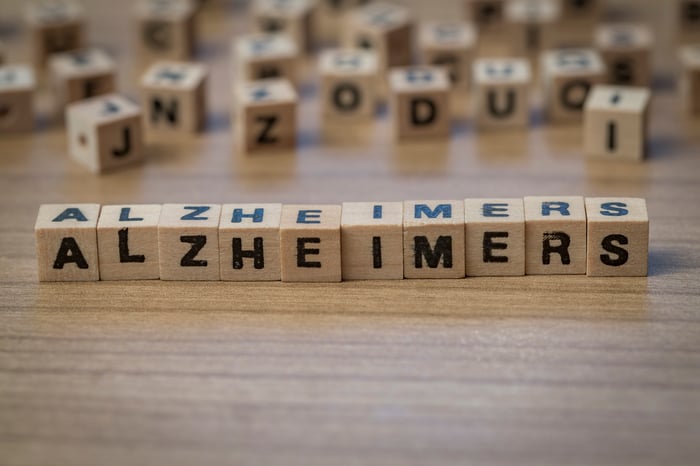 Merck's verubecestat inhibits the beta-site amyloid precursor protein cleaving enzyme 1 (BACE1). BACE1 is an enzyme that's involved with the development of amyloid beta. Amyloid beta consists of pieces of protein that clump together and build up over time into amyloid plaque in the brain. The goal of BACE inhibitors is to prevent the buildup of this plaque, and thereby slow the progression of Alzheimer's disease.

Verubecestat showed great promise in an early-stage study. Patients with Alzheimer's disease taking a 60 mg dose of the experimental drug experienced sustained reduction in the levels of beta-amyloid peptides.

Lilly's solanezumab also targeted the buildup of amyloid beta, but through a different mechanism. The humanized monoclonal antibody binds with soluble forms for the peptide that are thought to interfere with cognitive function.

However, the drugmaker initially saw some potential for solanezumab in reducing cognitive decline in patients with a mild form of Alzheimer's disease. Lilly moved forward with another late-stage study, which also flopped.

Although Lilly has thrown in the towel for solanezumab, Merck is continuing to evaluate verubecestat in a late-stage study for treating Alzheimer's patients with early symptoms of the disease. Lilly and AstraZeneca are partnering on their own BACE inhibitor, which is currently in a late-stage trial.

Roche (RHHBY 4.07%) has also run into dead ends in the past in treating Alzheimer's disease. Gantenerumab disappointed in a previous phase 3 study targeting the indication. However, Roche thought the experimental drug might have a better chance of success given in higher doses. The company has two late-stage studies currently in progress, one for gantenerumab plus another for crenezumab.

Biogen (BIIB 0.26%) claims one of the most promising Alzheimer's disease candidates right now. The biotech announced encouraging results from an early stage study of aducanumab in 2016. These results showed reduction in amyloid plaque, and more importantly, the rate of clinical decline in patients. Aducanumab is now in a late-stage study.

A couple of companies are pursuing the tau theory. Slovakian biotech AXON Neuroscience has a phase 2 study of its AADvac1 tau vaccine in progress. AC Immune is working with Johnson & Johnson on tau vaccine ACI-35 and with Roche on an anti-tau antibody. Both experimental therapies are in early-stage testing.

Axovant Sciences (AXGT -8.66%) is taking yet another approach. Alzheimer's disease patients have low levels of a neurotransmitter chemical called acetylcholine. Axovant's intepirdine is a 5HT6 receptor antagonist that blocks the receptor's ability to decrease acetylcholine levels. The experimental drug is in a late-stage clinical study for treating patients with mild-to-moderate Alzheimer's disease.

With the Alzheimer's-disease landscape littered with failures, it's probably wise to focus more on candidates farther along in the pipeline -- even though several late-stage drugs have also flopped. Merck's continuing late-stage study of verubecestat isn't scheduled to wrap up until 2019. Biogen should report results for aducanumab in 2019, also.

Roche is on track to announce results from its study of gantenerumab in the same year. Results from the late-stage study of Roche's crenezumab are expected in 2020. It's possible, of course, that these studies could be halted early if there's no chance of success -- just as Merck recently did.

The earliest hope for an effective Alzheimer's treatment is with Axovant's intepirdine. Results from the company's late-stage study should be announced in the third quarter of this year.