If you have invested in utility giant Southern Co (NYSE:SO) for more than a year, you might think it makes money operating regulated electric utilities in southeastern states. While that hasn't changed, after completing a couple of mergers in 2016 and a push into renewable power, Southern now does a whole lot more than it once did. And the changes aren't over yet. Here's how Southern Co makes money today and how it hopes to make money tomorrow.

Where Southern was and where it is going

Generating electricity remains the core of Southern Co's business. For example, in the fourth quarter of 2015, revenues from the company's electric utilities made up nearly 85% of the company's top line. It's wholesale business, which is where the company's renewable power business resides, made up about 10%, with the rest falling into the "other" category. Call that the baseline.

During 2016, there were some big changes. Southern Co completed the acquisition of AGL Resources, a natural gas company with utility and midstream pipeline assets. In addition, it pushed more aggressively into renewable power on the wholesale side of its business, buying additional solar assets and aggressively buying wind assets. As if that wasn't enough, the company also bought PowerSecure International, which works in the distributed power space.

The changes are already having a big impact on Southern's business. In the third quarter of 2016, the contribution of traditional electric utilities was down to around 75% of revenues. Wholesale electric continued to make up around 10% of the top line, though revenues in the group increased by nearly 70% year over year. Natural gas made up about 8% of sales. Other, again, made up the difference. When the company reports fourth-quarter numbers, natural gas will be an even bigger piece of the pie since the AGL acquisition didn't close until July 1st. 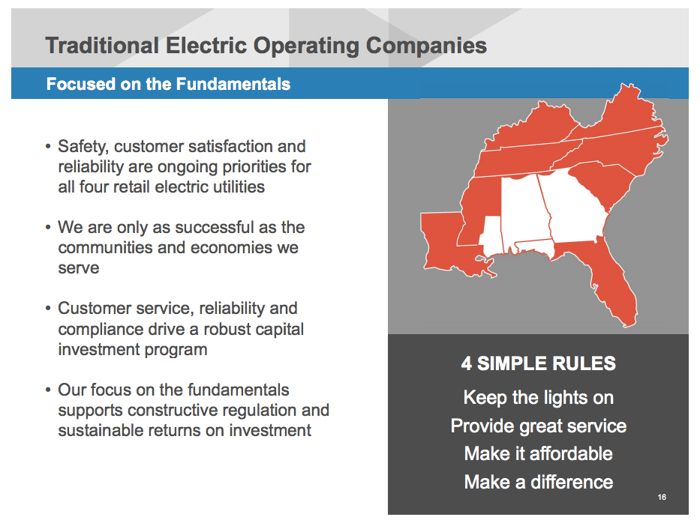 Clearly, generating electricity will remain the biggest part of Southern Co's business as it charts a new course to the future. But it is moving toward a more diversified business model, notably one that's embracing alternative fuels (solar and wind) and new ways of working (distributed power). The end goal is to do things in sort of the same way.

For example, in 2015, 92% of revenues came from regulated electricity sales, which helps the company support a respectable dividend (the yield is around 4.6% recently) that grows over time (over 15 years of annual dividend hikes). By 2021, the company is forecasting that it will get 78% of revenues from its regulated electric and gas businesses, and 17% from long-term contracts (pipelines and renewable power). That outlook means stable businesses will account for 95% of the company's top line, which will still support that notable and growing dividend, even though the big-picture view of the business will look a little different. 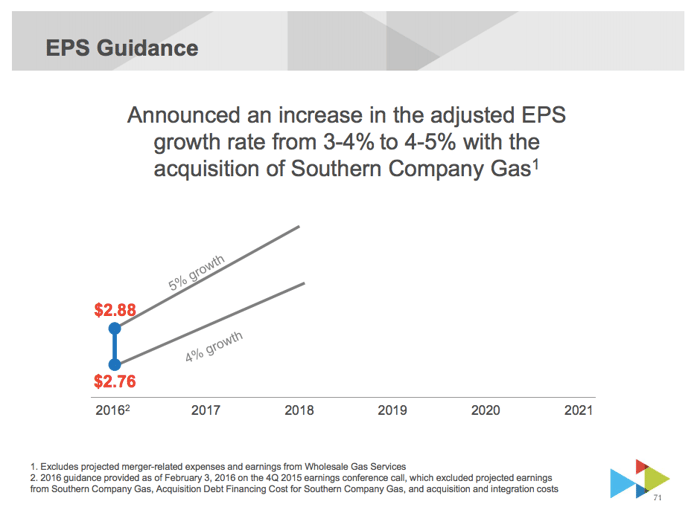 The big difference is that the dividend so many investors rely on will be supported by a far more diverse business -- and one that has greater growth potential. To put an actual number on that, Southern Co increased its near-term earnings growth projections from 3%-4% to 4%-5% after the AGL merger. That may sound like a small move, but for a utility, that's a huge change.

Moving with the times

Southern Co is like a giant ship -- change happens slowly. But change does happen, and 2016 will likely prove to be a key turning point for the utility. It isn't getting out of the utility business, but it is shifting along with the industry. That includes the big move into natural gas, a string of investments in renewable power, and its dabbling in sometimes-controversial distributed power.

So, the historical mix was mostly regulated electric utilities, but the outlook is for a far more diverse business backed by revenues from regulated assets (both electric and gas) and long-term contracts (midstream pipelines and power agreements). In the end, Southern Co is going to make money a bit differently from here on out.

How Exactly Does Southern Co Make Money? @themotleyfool #stocks $SO Next Article
Current