Here's why you shouldn't be overlooking this key catalyst.

With the iPhone providing 64% of trailing-12-month revenue at Apple Inc. (AAPL -1.51%), the tech giant's business is still primarily driven by that segment. But that doesn't mean investors should overlook Apple's other business segments. One is standing out more than ever: the company's App Store, iTunes, Apple Music, iCloud, Apple Pay, licensing, and other services. 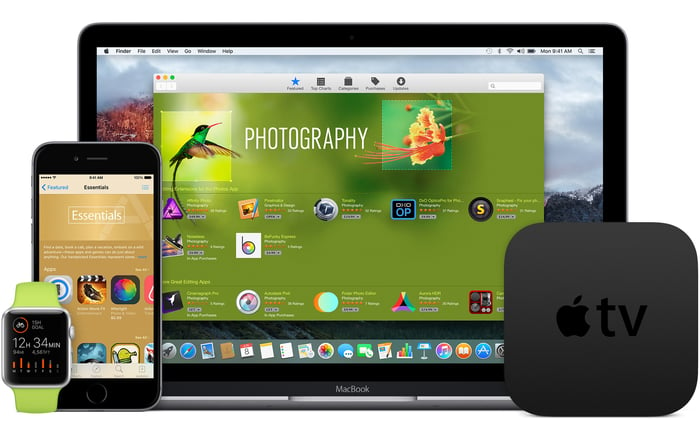 1. $7.2 billion: In Apple's most recent quarter, quarterly services revenue hit an all-time high of $7.2 billion -- up 18% year over year, handily exceeding Apple's overall revenue growth of 3% and beating growth in any other segment.

But even this growth in Apple's services segment understates how rapidly services revenue is growing. Apple CFO Luca Maestri explained the discrepancy between reported growth and actual segment growth in the company's first-quarter earnings call:

Our run rate growth was actually higher when taking into account two discrete items. On one hand, the 14th week added to Services revenue this December quarter. On the other hand, that benefit was more than offset by the comparison to the one-off $548 million patent infringement payment included in Services revenue a year ago.

2. 9.2%: Apple's services segment is growing as a proportion of total revenue. In the company's most recent quarter, services accounted for 9.2% of total revenue, up from 8% in the year-ago quarter and 6.4% in the same quarter two years ago.

3. 43%: Adjusting for the extra week in Apple's first quarter this year, App Store revenue soared 43% year over year, shattering all previous records. This was driven by growth both in average revenue per paying account and in the total number of paying accounts.

As Maestri was sure to mention, Apple's App Store revenue growth outpaced the overall app industry, and more than doubled 2016 revenue from Alphabet's Google Play store.

Going forward, Maestri believes "the App Store is going to be a significant driver of growth."

4. $3 billion: If you had any doubts about the importance of the App Store to Apple's services segment, wonder no longer: It's critical. Apple said fiscal first-quarter App Store revenue was $3 billion in December alone.

5. $60 billion: Based on the trajectory of developer revenue in 2016, the business of apps is just getting started. Apple's developer community has now raked in $60 billion in earnings, garnering over $20 billion just in 2016. 7. $51 billion: What kind of growth should investors expect from Apple's services segment? The business could double over the next four years, according to Apple management. This would bring annual services revenue to a staggering $51 billion in 2020.

While these figures alone make a great case for investors to pay close attention to Apple's services segment, the very nature of Apple's services themselves justify the segment's importance. Unlike the unpredictable nature of focused product revenue from iPhone, Mac, and iPad, services revenue is more sustainable, stable, and predictable. Further, it's a solid measure of the degree to which a growing number of customers are becoming increasingly invested in Apple's powerful ecosystem of hardware, software, and services.