Picking the winning suppliers amid a changing auto industry could be difficult going forward. Here are two key points from the recent quarter for investors to consider.

Investors in major automotive suppliers are in an interesting position as the industry is shifting in many ways. Major automakers are consolidating suppliers, powertrains, and platforms in an attempt to become more cost-efficient. More electric and alternative-power vehicles are being sold, opening up the door for supplier innovation. On the flip side, sales of new vehicles in the U.S. are peaking, which could muddle suppliers' growth story. Investors who can sift through the industry and find well-positioned suppliers amid the changing landscape could be well rewarded.

With that said, let's take a look at a premier supplier, American Axle & Manufacturing Holdings (AXL 3.66%), and its fourth-quarter results to find two major takeaways for investors considering buying in. 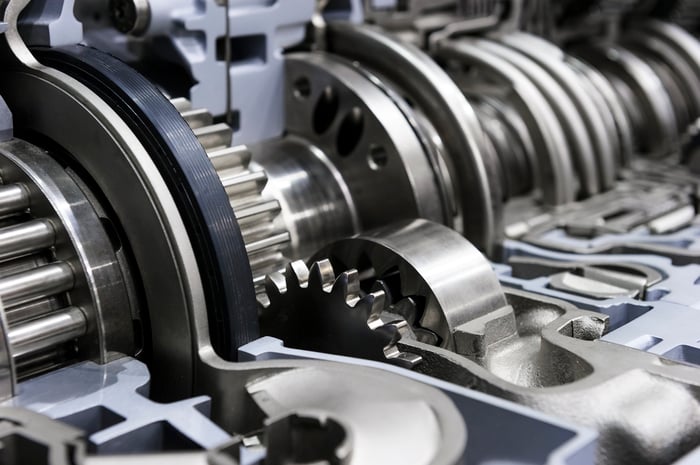 Another metric for investors to follow as the industry squeezes some suppliers in favor of others is content per vehicle. AAM's has remained steady, but it did slightly decline in 2016. During the fourth quarter, AAM's content per vehicle totaled $1,634, down slightly from the prior year's $1,645. That trend held true for the full year as well, down to $1,617 from 2015's $1,645. Moving forward it'll be important because the content per vehicle could swing higher if the company can innovate new technology that drives content pricing higher -- possibly alternative-powered vehicle technology or powertrains -- or simply because a well-positioned supplier will receive more parts per vehicle as major manufacturers look to divide more of the car into fewer suppliers. AAM could find itself on either side of that coin, so it's a figure to watch.

"In 2016, AAM achieved another year of record sales and gross profit, strong global operational performance, and new business wins that will further drive sales diversification," said AAM Chairman and Chief Executive Officer David C. Dauch in a press release. "As we look toward what we expect to be a transformational year for AAM in 2017, we will be laser focused on our commitment to provide our customers with world-class quality, operational excellence and technology leadership."

One of the biggest challenges facing AAM recently has been reducing its reliance on General Motors for revenue. General Motors announced it would start insourcing axle production for its next-generation full-size pickup trucks, which was a blow to AAM as it was a major contributor to the program. On the bright side, AAM has taken steps to grow its top line to help offset the loss in GM business through 2019 -- although there could be another drop-off in 2020 that AAM will need to offset. 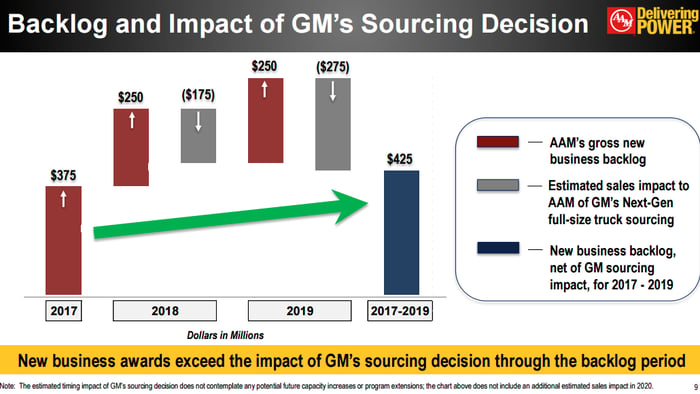 Furthermore, General Motors represented about two-thirds of AAM's sales during 2015, and thanks in part to a recent acquisition of Metaldyne Performance Group, that percentage is down to 41% pro forma 2015 and will shrink to an estimated 32% during 2020.

Another takeaway for investors is that light-vehicle production estimates from third-parties, shown below in AAM's Jan. 11, 2017, Deutsche Bank presentation, seem a bit optimistic compared to AAM's flat seasonally adjusted annual sales rate (SAAR), in my opinion.

Of course, investors would love for more and more vehicles to be produced with even more AAM content per vehicle, but these third-party production estimates seem a tad high. The reasoning behind the ballooning production is "growing exports," but it would be wise to temper expectations if that's a major part of your bullish thesis. It'll be important to watch these estimates and home in on what management is providing financial performance guidance on -- whether they give investors stronger guidance estimates due to those higher production forecasts, or more cautious guidance based on peaking SAAR.

AAM will need to keep reducing its reliance on General Motors, especially as U.S. new-vehicle sales peak and production estimates seem lofty. Investors also need to keep an eye on AAM content per vehicle and cost synergies created with its acquisition of MPG -- if management can tackle those issues, 2017 will be a solid year.