Aqua America (NYSE:WTRG) and American States Water Works (NYSE:AWR) both operate as water utilities in the United States; however, they are quite different companies.

Aqua America is the second largest water and wastewater utility in the country and operates in eight states, whereas American States is considerably smaller and has regulated operations in just a single state -- California. Aqua America has an aggressive growth-by-acquisition strategy in its regulated business, which is not the case for American States. Aqua America's market-based business includes selling water for hydraulic fracturing, or fracking, to energy companies, while American States operates and maintains systems located on military bases through long-term contracts with the U.S. government.

So, which of these companies' stock makes the better long-term investment? 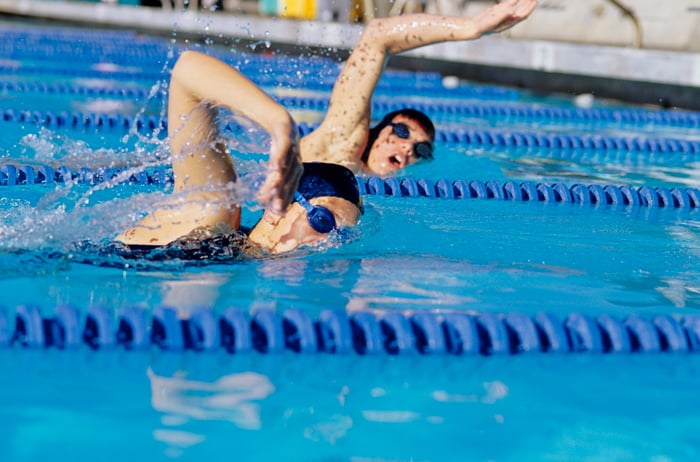 Here's how the two companies stack up on some key metrics:

Turning to some metrics not listed in the chart and qualitative factors, Aqua America operates regulated businesses in eight states, whereas American States' regulated business is limited to California. This greater geographic diversity provides Aqua America with greater opportunity to grow through acquisitions. Water utilities typically acquire smaller utilities close to areas where they already operate, since this strategy leads to economies of scale.

Indeed, along with American Water Works, the industry's giant, Aqua America has what is by the standards of a water utility an aggressive growth-by-acquisition strategy in its regulated business. In 2016, Aqua America made 19 acquisitions, which along with its organic growth increased its customer base by 1.6%.

The company's greater geographic diversity also makes it less vulnerable to region-specific challenges, such as droughts. Droughts can negatively affect a water utility by crimping water revenue growth if mandatory water-use restrictions are enacted and by increasing operating expenses. Water utilities must then try to recoup any lost profits caused by droughts by requesting rate increases.

The case for American States Water

American States stock's total 10-year total return has significantly outpaced that of Aqua America, as per the following chart. 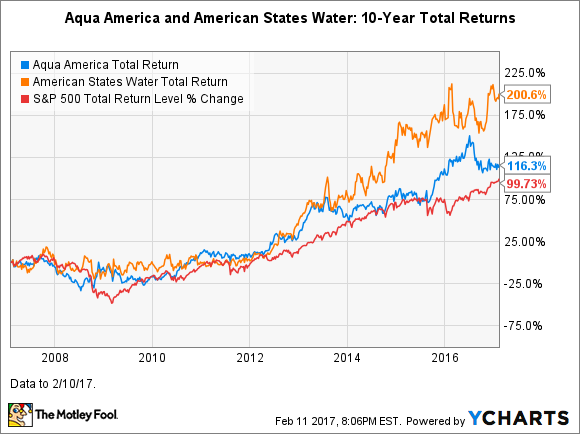 Past performance isn't indicative of future performance. However, in my opinion, the long-term past performance of companies operating in relatively stable industries often reflects their sustainable competitive advantages and their management's ability to set strategies and execute on them.

American States lags Aqua America with respect to more recent revenue and earnings growth because of the California drought. (The state has begun to emerge from this epic drought, now in its fifth year, thanks to a very wet winter.) However, over the longer term -- such as the 10-year period -- American States has had stronger earnings growth and, to a lesser degree, revenue growth.

American States is sitting prettier with respect to its relative cash and debt position. It had $2.8 million in cash and equivalents at the end of the third quarter. While this number lags Aqua America's $3.7 million in cash, it's better relative to the company's smaller size, whether measured in market cap or annual revenue. The company's debt-to-equity ratio of 0.8 is lower than Aqua America's 1.0. American States' somewhat stronger balance sheet should provide it with a better cushion during more challenging times.

A few qualitative factors favor American States. First, the company has long been considered extremely well run. Second, its CEO has led the company since 2009, whereas Aqua America's CEO has just over a year and a half in the position. Third, evidence suggests, per Philly.com, that Aqua America made an $11 billion bid for electric-power-transmission company ITC Holdings in early 2016, before it was acquired by Canada's Fortis, Inc.  If accurate, this would be a huge move, given that Fortis is not only bigger than Aqua America in terms of annual revenue, but also operates in a different industry.

There is no clear-cut winner. However, we don't simply have a tie, as these two stocks are largely suited to different types of investors. Given Aqua America's reported bid for ITC, it might make an interesting growth play for investors comfortable with a water utility that appears to be open to making bold acquisitions in unrelated spaces.

American States appears to be the better choice for more typical investors in water utilities who value these stocks for their rather predictable and dependable earnings, despite the added uncertainty that its drought-prone territory adds to the mix -- though this factor needs to be monitored. While a bid such as the one that Aqua America reportedly made might turn out great, it could also backfire.

Absent the reported ITC bid, however, I'd choose Aqua America as the overall winner at this time, because of the challenges presented by American States' drought-prone service area.