Altria looks like a solid investment, but its core business model could crumble in the near future.

Investors can add all sorts of investments to an IRA, but many financial advisors will suggest sticking with conservative dividend stocks. The reason is simple -- blue chip income generators generally bounce back from big market crashes, and the compounding effect of reinvested dividends can deliver massive returns over several decades.

At first glance, tobacco giant Altria (MO 0.39%) seems like a great stock for an IRA. Its flagship Marlboro brand dominates the U.S. market, it pays a hefty forward dividend yield of 3.4%, and it's hiked that dividend every year since it spun off its overseas business as Philip Morris International (PM 0.12%) in 2008. But if you gaze further into Altria's future, you'll realize that it's not a great long-term pick for your IRA at all. 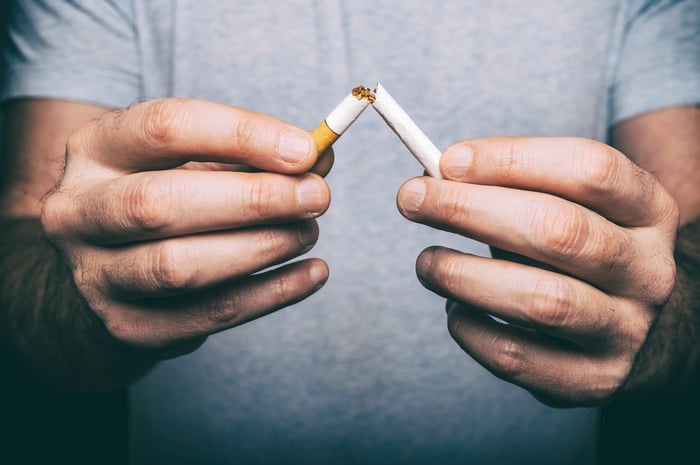 Altria shares have rallied 20% over the past 12 months, outperforming Philip Morris' 15% rally but slightly underperforming the S&P 500's 25% gain. Much of that growth can be attributed to two factors -- a flight to high-yielding dividend stocks in a low interest rate environment and Altria's purely domestic business insulating it from the currency headwinds which gobbled up Philip Morris' overseas gains.

Altria's Marlboro brand controlled 44% of the U.S. cigarette market in 2016. Its other brands boosted its total share to 51.4% -- a smidgen higher than its 51.3% share in 2015. It also controlled 26.7% of the U.S. cigar market, mainly though its Black & Mild brand, and 55.6% of the smokeless market with snuff brands like Skoal and Copenhagen. Altria's dominance of those markets gives it a wide moat against potential challengers.

Altria's dividend is supported by a payout ratio of 87%, which indicates that its annual dividend hikes should continue for the foreseeable future. Reinvesting those dividends through a DRIP (dividend reinvestment plan) lets you automatically purchase additional shares with those dividends while sidestepping brokerage fees -- which boosts your total return over time through compounding.

Altria has offset declining cigarette shipments by raising prices. There's still room to raise prices, since cigarettes in the U.S. remain much cheaper than cigarettes in higher-priced markets like Australia and the U.K., but that strategy is finite. Altria also reduced its headcount by over 3% over the past five years to slim down its operations and protect its bottom-line growth.

Altria has also been diversifying into non-tobacco markets like wine, e-cigarettes, and a stake in brewery SABMiller (now part of Anheuser Busch InBev (NYSE: BUD) ), but these businesses are too small to offset its dependence on cigarette sales. On the bright side, the SABMiller/AB InBev merger gave its net income and earnings a big boost at the end of 2016. That windfall -- combined with price hikes, cost cuts, and big buybacks -- enabled Altria's earnings growth to sharply outperform its revenue growth over the past three years. 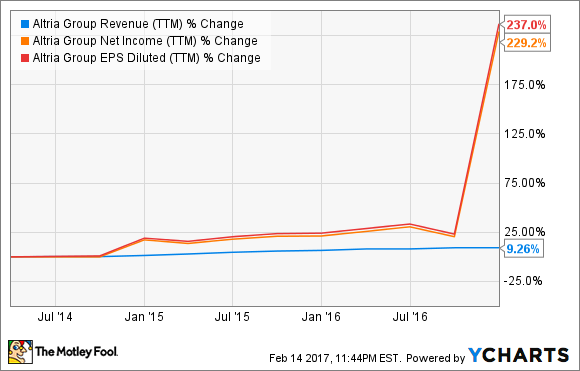 That might seem like great news, but Altria's stagnant top-line growth will catch up to it a few years down the road, once it runs out of prices to hike and employees to lay off. When that happens, Altria's purely domestic business will likely run out of steam. That decline will likely make Philip Morrs' overseas business, which is still growing on a constant-currency basis, seem much more appealing.

Lastly, Altria's P/E of 27 is higher than PM's P/E of 25 and the industry average of 21, and its yield is hovering near a historic low. Those numbers strongly indicate that Altria's price growth was fueled by investors flocking to dividend stocks in a low interest rate environment, instead of long-term confidence in its business model.

Smoking could be hazardous to your IRA

I personally like tobacco stocks as income investments, but only for a time frame of three to five years. Altria will likely remain a safe play for income investors for now, but its sluggish top-line growth and shrinking core market indicate that it isn't a "buy and forget" stock that is guaranteed to quietly grow in your IRA over the next few decades. That's why I'd never put it in an IRA.