The headlines didn't look good for Waste Management (NYSE:WM) after the company reported fourth-quarter earnings on Feb. 16. Most highlighted the fact that the company's earnings had missed analysts' consensus expectations. Unsurprisingly, the stock price took an immediate hit.

But those expectations were lofty after the company had posted earnings beats for a solid year. And considering that just about every number in the earnings report looks good -- if not phenomenal -- compared to last year, it's also not surprising that the stock price recovered throughout the day. Here are the nitty-gritty details. 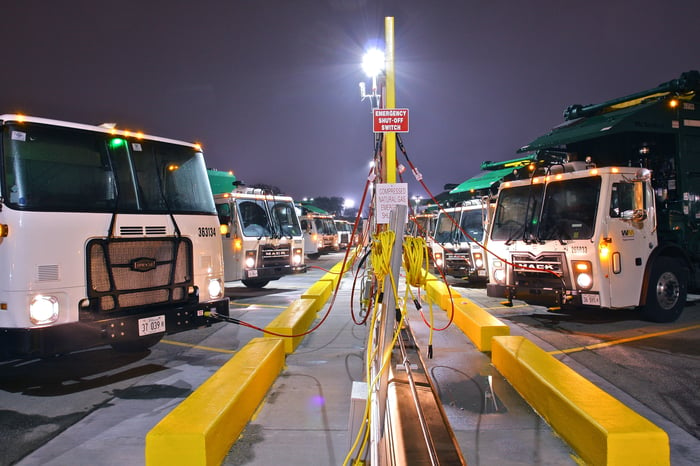 What happened with Waste Management this quarter?

Well, the company crushed everything except analysts' lofty earnings expectations. Revenue, income, cash flow, and EPS were all up versus the year-ago quarter; free cash flow more than doubled.

Essentially, Waste Management can make more money by increasing its core price or by hauling and disposing of higher volumes of trash and recycling, or both. This quarter, it was both. Yield and volume increased by $118 million in the company's collection and disposal business, while recycling yield and volume increased by $51 million. The company's core price was 5.1%, up from 4.3% in the year-ago quarter.

Recycling commodity prices -- which had long been a thorn in the company's side -- had jumped in Q3 2016, which improved the company's bottom line significantly. That trend continued into Q4, confirming that this was more than a temporary blip, and recycling volumes climbed by 2.4% in the quarter. Average recycling commodity prices at Waste Management's recycling facilities were approximately 31.6% higher year over year in Q4 2016. These improvements were responsible for almost $0.03 of EPS.

In bigger news, new CEO Jim Fish took the reins during the quarter from outgoing CEO David Steiner, who had led the company since 2004. Fish was pleased with the company's performance in his first quarter at the helm (who wouldn't be?), commenting, "In 2016 we continued our focus on core price, disciplined volume growth, and cost control. Our results in each of these areas exceeded our expectations."

What's next for Waste Management?

Fish summarized the company's outlook by saying, "We will maintain our focus on driving core price, growing high margin volumes, and controlling costs, positioning us for strong earnings and cash generation in 2017."

Waste Management will continue to share the wealth with shareholders, announcing its intention to increase the dividend by $0.06, or 3.7%, to $1.70 per share on an annual basis, for an approximate annual cost of $750 million. The company is also predicting it will spend $100 million to $200 million on tuck-in acquisitions during 2017, but it's also anticipating massive free cash flow of $1.5 billion to $1.6 billion, which will be more than able to cover those costs.

The company was a bit more conservative in its outlook when it came to recycling operations, predicting they would only contribute about $0.03 in EPS for the year, with much of that coming in the first quarter of 2017. Remember, that was about what they contributed just in the fourth quarter of 2016, so the company clearly isn't convinced this is a long-term trend.

Basically, though, there's a lot to like, here: a strong company executing well.