Amazon's long-term growth trajectory has been nothing short of amazing. The company is only 23 years old but it is already ringing up more than $100 billion in annual sales. That massive revenue growth rate has propelled its stock to new heights, and those who got in early have been hugely rewarded.

With that in mind, we asked five of our Fools to highlight stocks that they believe have Amazon-like growth potential. Read on to see why they picked First Solar (NASDAQ:FSLR), TripAdvisor (NASDAQ:TRIP), Under Armour (NYSE:UA) (NYSE:UAA), Box (NYSE:BOX), Visa (NYSE:V) 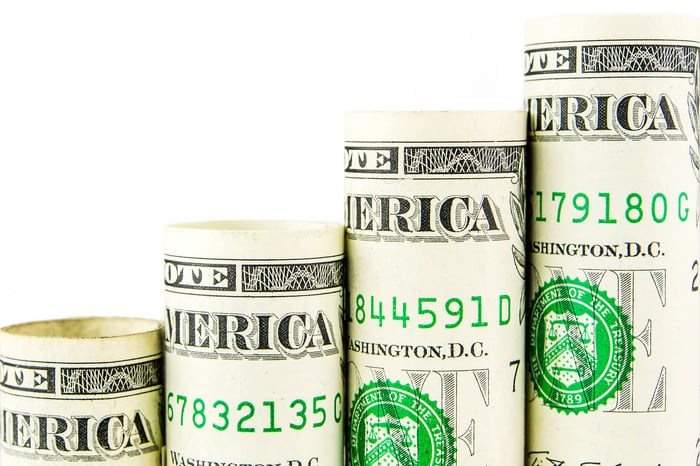 The runway for solar is as long as they come

Tyler Crowe (First Solar): For all the knocks on the solar industry over the past couple of years, there is no denying that the growth runway for providing electricity for the next several decades is immense. According to the Bloomberg World Energy Outlook, solar and wind are expected to make up 64% of new installed capacity between now and 2040. In mature markets like the U.S., most new power installations are to replace existing ones, but the real opportunity is in developing markets as 8.6 terrawatts of generation capacity -- 8 times the size of the entire U.S. market -- is expected to be added over that 20-plus-year time frame. Even if solar has to duke it out with wind for a piece of the pie, that's a big pie to share.

Up until recently, the argument could have been made that solar couldn't compete with other forms of power generation on cost, but that has changed a lot. According to a Lazard levelized cost of energy study, utility-scale solar -- the kind of projects First Solar specializes in -- is a less expensive power option than any fossil fuel option on an unsubsidized basis (that means no tax credits included). Now that it's one of the cheapest options out there, you can imagine that demand will grow considerably from here.

Of the solar companies out there, few are better positioned to grow than First Solar. The company is a leading producer of thin-film solar panels -- a less expensive panel type -- and has consistently outdone its peers at  generating returns on invested capital for close to a decade. Those rates of return and cash-generating ability will make it that much easier for the company to reinvest in its business and capture the massive market opportunity ahead of it. If you want an investment to capture the profits inherent in electrifying the world, take a look at First Solar.

Brian Feroldi (TripAdvisor): Investors who are looking for the "next Amazon" should try to find an emerging leader in an industry that is already quite big, yet is still primed for substantial growth. When I scour the investment landscape, I can't help but feel that those criteria describe TripAdvisor's situation perfectly.

While TripAdvisor is already a large company -- it currently rings up $1.5 billion in total sales each year -- that's still only a tiny drop of the global travel market. In fact, TripAdvisor has noted that $492 billion is spent on online travel each year -- a figure that itself represents less than half of total worldwide spending on travel. Thus, TripAdvisor could literally grow its top line by double-digit percentages for years on end and still be nowhere close to saturating its market opportunity.

Of course, successfully executing to take advantage of that massive opportunity is another matter. But if you're looking for a stock that holds the promise of Amazon-like growth, TripAdvisor could be it.

Jason Hall (Under Armour): Recent Under Armour investors can't be pleased, having seen their shares lose more than half their value over the past six months: 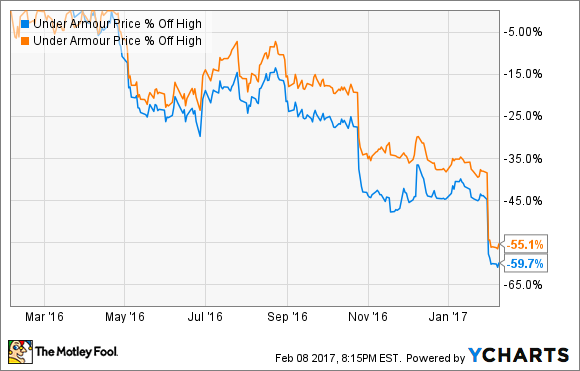 I know I haven't been happy about it. But while the stock has frustrated me, the business has continued to do quite well, growing sales at a steady double-digit-percentage clip overall, and delivering huge gains in its burgeoning footwear segment.

That's not to say everything is rosy. Under Armour is facing stiff competition from much larger, better-capitalized competitors, and there is some weakness in demand in North America across multiple product lines.

But that's short-term noise that distracts from the incredible long-term opportunity for Under Armour: a global middle class that's set to explode in coming decades. As of this writing, there are less than 3 billion people on the planet in the middle class. Within just a couple of decades, that number could double. According to the OECD, the global middle class is on track to number nearly 5 billion by 2030. That's less than 15 years from now.

And Under Armour is taking major steps to grow its brand presence around the world, particularly in Asia, where the bulk of the world's new middle class will be. China, for instance, is one of the company's smallest markets today, but is also one of its fastest-growing. And China's middle class is expected to number some 600 million people within five years.

Bottom line: As well-known as the Under Armour brand may seem, it's still a very small athletic apparel company on a global basis. But as the world's consumer class grows, few companies will be as well-positioned to profit from that growth as Under Armour.

Cloud-based storage and sharing still in its infancy

Chuck Saletta (Box): Box is a leader in the emerging field of secure, cloud-based data storage and collaboration. Its revenues keep climbing, quarter after quarter,  and its business continues to show signs of edging toward profitability. Its secure collaboration services are trusted by major businesses  and even the U.S. Department of Justice,  which is a clear sign that Box has figured out how to deliver secure sharing.

Revenues over the first nine months of its most recent fiscal year clocked in at nearly $289 million, up more than 32% from the same period of the previous year.  In addition, the company's loss over the most recently reported quarter was $0.30 per share, down from $0.45 the same period a year ago . Even more appealing for its potential growth, Box is on track to spend around $100 million per year on research and development, some of which should pay off in profitable innovations.

Today's Box has a combination of solid and growing revenues from an in-demand business line, operations that are trending closer to profitability, and a strong research budget for growth. That combination gives it the potential to keep building its business for quite some time to come.

A long runway for high growth

Jordan Wathen (Visa): When I think of Amazon-like growth potential, I think about businesses with long runways of uninterrupted revenue growth. Visa strikes me as a company that can meet that high bar. Perhaps unlike Amazon, I expect Visa will turn most of its revenue growth into profits, and pass those back to shareholders in the form of dividends and share repurchases.

Visa benefits from the global shift of people using cards to pay for things, while also having the potential to take market share from costlier competitors like American Express. The company's cost advantage enabled it to steal one of AmEx's largest co-brand partnerships, and its recently closed acquisition of Visa Europe puts all of its global pieces back together again.

Although a strong U.S. dollar has been a recent headwind to its earnings, one can't assume that currency will be a perennial 2- to 3-percentage-point drag on earnings. At some point, the dollar's strength should turn to weakness, and Visa's quarterly reports will begin to reflect its true earnings power.