Please ensure Javascript is enabled for purposes of website accessibility
Log In Help Join The Motley Fool
Free Article Join Over 1 Million Premium Members And Get More In-Depth Stock Guidance and Research
By Rick Munarriz – Feb 19, 2017 at 9:11AM

Disney's Animal Kingdom finally gets Rivers of Light going, but the small amphitheater is already becoming a thorny issue.

Walt Disney's (DIS -1.96%) Animal Kingdom finally got its nighttime show going this weekend. The debut of Rivers of Light at Disney's animal-themed park is opening to rave reviews, possibly justifying the 10-month delay of its debut.

However, a glaring issue with the spectacle of lights, music, and water projections is that the richly themed amphitheater that hosts the show only has 5,000 seats. Social media was ablaze with snapshots of guests shut out of the weekend performances, settling for standing on park paths behind the river to catch obstructed views.

It gets worse. Disney's Animal Kingdom is able to double the show's capacity by wedging two performances into the calendar on some nights, but the logjam of guest traffic after the first show as folks were leaving Rivers of Light, and another batch of guests queueing up for the second installment, proved to be unsettling gridlock.

Crowds trying to exit first show and queue for second show of #RiversofLight cause full stand still in Asia area of DAK pic.twitter.com/24a35M6Wd6

There were more than 10.9 million visitors at Disney's Animal Kingdom in 2015, according to industry tracker Themed Entertainment Association. This translates into an average of nearly 30,000 guests a day. Just a sixth of those guests will have amphitheater access to Rivers of Light for any given performance, or a third of the park's guests on a night with two shows.

Still, it gets worse. We're just talking about an average of 30,000 guests a day. During peak periods -- when one-day tickets cost 20%, or $20 more -- there will be a lot more than 30,000 visitors, so folks are paying more on nights with fewer opportunities to catch Rivers of Light. 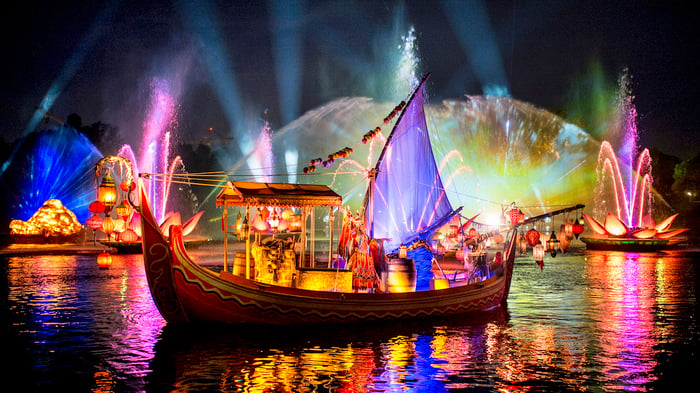 Coming out of the dark

There's no denying that Rivers of Light will be a game changer. It appears to have overcome the initial technical glitches that postponed the waterfront show's debut at least twice last year. However, the venue's limited capacity -- something that I've been saying would be an issue since last year -- is a glaring problem that will only get worse.

Disney's Animal Kingdom needed a nighttime performance to encourage the theme park to extend its operating hours. Disney World's three other parks have signature shows at night. However, capacity isn't an issue at EPCOT and Magic Kingdom, where everyone in the park can grab the aerial visuals without an actual amphitheater. Disney's Hollywood Studios has Fantasmic, but that show plays in a larger 6,900 seat arena -- and Disney's Hollywood Studios lags the attendance levels of Disney World's three other parks.

It's also a safe bet that attendance will spike in three months when Pandora -- The World of Avatar opens. Disney World's most ambitious expansion since 2012 will make the park even more popular. Disney shareholders will argue that a surge in attendance is a good problem to have, but if folks are bellyaching about crowded walkways and the inability to get into signature shows now, just imagine how things will be when a lot fewer than a third of those day's visitors have a shot at catching Rivers of Light.

Disney can't just add more performances. As a nighttime show, it has to wait until dusk surrenders to darkness, something that happens much later as we head into the peak summer period.

The only currently scheduled performance on May 27 -- the day that the Avatar-themed expansion officially opens -- is 9:15 p.m., and it's safe to say that a lot less than a sixth of the Memorial Day crowds will be able to grab a seat for Rivers of Light that night.

There are some industries that thrive on the disequilibrium between supply and demand. Video game consoles and smartphones cash in on the buzz-building dissatisfaction.

Things don't work the same way at the theme-park level. Guests pay a lot for a Disney vacation, and when they return home after being shut out of heavily marketed new attractions, they rant to friends and on social media. Hype morphs into discontent, and a crowning achievement in entertainment becomes a case study of how a great idea executed poorly does a business more harm than good.