Please ensure Javascript is enabled for purposes of website accessibility
Log In Help Join The Motley Fool
Free Article Join Over 1 Million Premium Members And Get More In-Depth Stock Guidance and Research
By Adam Levine-Weinberg – Feb 20, 2017 at 11:45AM

The largest off-price retailer in the world has posted big sales gains in recent years, but margin pressure in Europe has undermined its earnings growth.

Top off-price retailer TJX (TJX 0.43%) has become a favorite of investors over the past decade due to its consistent revenue and earnings growth. However, in the past two years, it has faced a variety of margin headwinds. As a result, earnings-per-share growth has fallen below its target range.

By contrast, its smaller rival Ross Stores (ROST 1.77%) has continued to post strong EPS growth recently. Looking back over the past 10 years as a whole, both companies have produced incredible earnings growth and huge stock price increases. However, Ross Stores has really separated itself from TJX since late 2014. 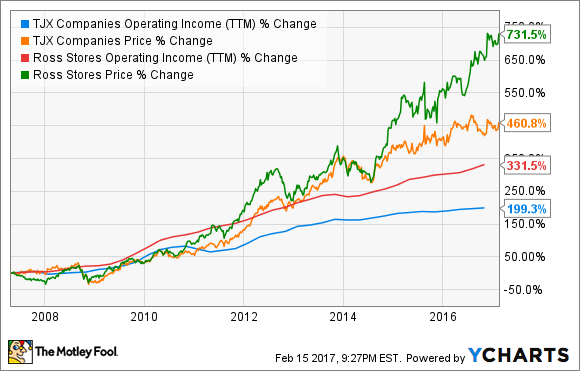 TJX will release its fourth-quarter earnings report and offer guidance for the upcoming 2018 fiscal year this week. Investors are desperately hoping for a return to stronger EPS growth.

In late 2013, TJX's management laid out a "growth model" calling for 10%-13% annual EPS growth in the following three years. This model called for 6%-7% annual sales increases, along with gradual margin improvements and a program of steady share buybacks.

A few months later, TJX ended its 2014 fiscal year with adjusted EPS up 15% for the full year. At that time, it provided solid guidance for fiscal 2015, calling for 8%-13% annual EPS growth.

TJX was able to meet its fiscal 2015 profit target, growing EPS by 12%. However, by the end of the year, management recognized that stiff margin headwinds would likely prevent TJX from reaching its EPS growth goal in the following year. As a result, the company projected that EPS would rise about 1%-3% in fiscal 2016. Nevertheless, TJX executives reiterated the 10%-13% growth model as a long-term target.

Ultimately, TJX beat its guidance in fiscal 2016 -- as it typically does -- with a 5% increase in adjusted EPS. However, it provided downbeat forward guidance once again. Analysts expect TJX to report adjusted EPS of about $3.52 for fiscal 2017 in its earnings release next week. That would represent a 6% year-over-year increase.

TJX's slowdown in earnings growth has been driven by two main factors. First, the strong dollar has created profit headwinds in the company's international markets. (As a purely domestic business, Ross Stores has been able to avoid this issue entirely.) Second, TJX has faced wage pressure in the U.S. due to new minimum wage laws and a stronger labor market.

Unfortunately, these headwinds aren't going away just yet. TJX CFO Scott Goldenberg has already told investors that wage increases will negatively impact EPS growth by 3 percentage points in fiscal 2018. Furthermore, Brexit has caused a sharp decline in the British pound, which will probably lead to more foreign exchange pressure. TJX is also making a variety of costly investments in IT and the supply chain to support growth.

Some of these headwinds will continue beyond fiscal 2018 as well. Thus, for TJX to start posting 10%-13% annual EPS growth again, it will need to offset these headwinds through stronger core earnings performance.

Can TJX get back on track?

Over the past two years, TJX has done a good job of offsetting wage headwinds in the U.S. Operating profit for the company's domestic segments rose 6.5% in fiscal 2016 and rose 6.5% again through the first three quarters of fiscal 2017.

Ross Stores has performed even better during this period. In fact, it has managed to increase its profit margin ever so slightly. However, with 6.5% operating income growth and the benefit of steady share buybacks, TJX would have a shot at 10% annual EPS growth.

The bigger problem has been outside the U.S. In fiscal 2016, a steep decline in the Canadian dollar caused segment profit to fall at TJX Canada. However, TJX's operations in Canada have bounced back in a big way since then. Through the first three quarters of fiscal 2017, segment profit has surged 16% in Canada.

The true culprit for TJX's mediocre earnings growth has been its international division, which consists of its European operations and the recently acquired Trade Secret chain in Australia. TJX International reported a 6% decline in segment profit for fiscal 2016 followed by a 25% plunge in segment profit year to date.

In late 2013, management said that TJX had the potential to earn a 10%-plus segment margin in Europe. However, over the past four reported quarters, its segment margin there is just 6%.

Thus, the key thing that investors should look for in the earnings report next week is evidence that management has a concrete plan to improve profitability in Europe and Australia. The U.S. and Canada remain very strong markets for TJX -- its subpar earnings growth can be blamed almost entirely on weak margin performance outside North America.