However, investors should also recognize a Chinese tech company that beats Facebook in terms of raw growth -- Shenzhen-based Tencent (OTC:TCEHY), which owns a massive ecosystem of social networks, web portals, e-commerce sites, and online games. Let's take a closer look at Tencent, and why it's a potentially more exciting growth play than Facebook.

Tencent is best known as the creator of messaging apps QQ and WeChat, and the parent company of developers Riot Games (League of Legends) and SuperCell (Clash of Clans). The numbers behind those apps and games are astounding -- QQ has over 650 million MAUs, WeChat has nearly 850 million MAUs, League of Legends has over 100 million monthly active players, and over 100 million people play Supercell's games every day.

Tencent also holds minority stakes in a wide variety of companies -- including Activision Blizzard, Glu Mobile, Sohu's Sogou search engine, and e-commerce site JD.com. The growth of that portfolio made Tencent one of the three most valuable companies in Asia alongside Samsung and China Mobile last year. It also made it the largest video game company in the world.

Tencent is 18 years old, but it's still posting double-digit sales and earnings growth. Last quarter, its revenue rose 52% annually to 40.4 billion yuan ($6 billion). Online ad revenues rose 51% to 7.5 billion yuan, thanks to new newsfeed ads within WeChat, which grew its MAUs by 30% annually during the quarter.

Within that total, its mobile gaming revenue surged 87% annually to 9.9 billion yuan, thanks to its purchase of SuperCell and its growing library of mobile games. PC games revenue rose 10%, as MOBA (multiplayer online battle arena), action, RPG, music, and sports games attracted a steady flow of gamers.

Like Facebook, Tencent is running out of room to reach new users, since about 70% of China's internet users already use its services. So to generate more revenues per user, Tencent is expanding its ecosystem into online payments, cloud services, and O2O (online-to-offline) services for WeChat like ride hailing, food orders, and e-commerce transactions.

That's why Tencent's "others" revenue -- which includes payment, cloud, and other services -- rose 348% annually to 4.96 billion yuan last quarter. A core growth driver is its payments platform WePay, which processes $50 billion in bank transfers every month. While that growth is impressive, investors should note that Tencent is currently battling Baidu and Alibaba on nearly all these adjacent fronts as the three tech giants leverage their respective strengths in gaming, search, and e-commerce to expand their overlapping ecosystems.

But despite all those big investments, Tencent's operating margins have remained comfortably above 30% over the past few years, thanks to its robust revenue growth and strategy of acquiring companies with high-margin businesses. 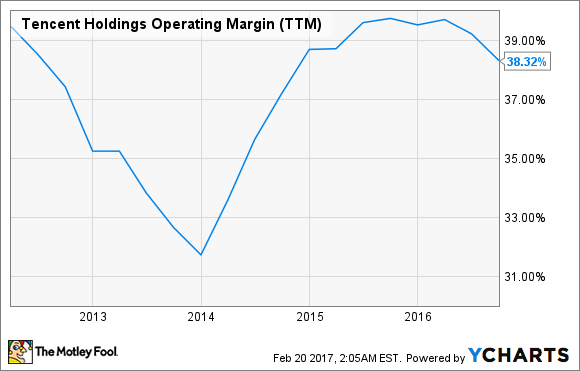 The ADR shares of Tencent aren't cheap at about 45 times earnings, but that premium could be justified by the company's impressive growth and the expansion of its ecosystem across multiple markets. Therefore, the next time you're thinking of adding a big, growing tech stock like Facebook to your portfolio, you might want to consider buying Tencent -- which has a more diversified business and stronger growth numbers.