When industry-leading toy-seller Mattel, Inc. (NASDAQ:MAT) reported its financial results on Jan. 25th, investors weren't impressed with its performance. Sales were down, and the company missed analyst estimates for both revenue and earnings.

This wasn't an isolated incident, either. Growth has been slowing for some time, with revenue in a downward trend in each of the last three years. The stock plunged nearly 18% the following day. 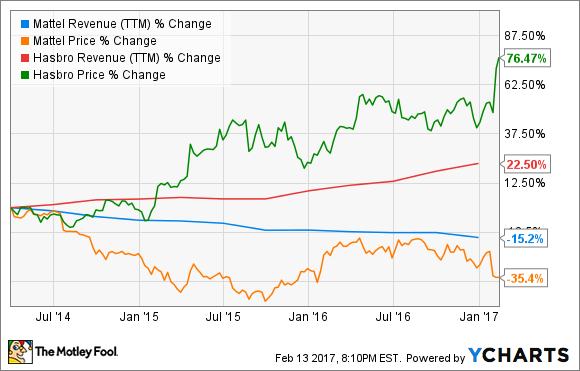 Our results were negatively impacted by a number of industrywide challenges, including a significant U.S. toy category slowdown in the holiday period, and increased forex headwinds, and while our sales at retail remained strong, the slowdown triggered elevated retail promotional activity and decreased shipping, all of which had a significant impact on our gross margin."

Sounds like the entire industry had dark clouds looming. Or did it?

There has been a great deal of focus on the performance of the toy industry and the read through for Hasbro's performance. Importantly, the industry is growing and continued to grow throughout 2016... we do not view and did not experience the season as different from other years.

If there were industrywide challenges, why wasn't Hasbro rained out? Two factors play a role here, both equally important.

A pot of gold at the end of the rainbow

In September 2014, Hasbro pulled off an astonishing coup, obtaining the licensing rights to The Walt Disney Company's (NYSE:DIS) Princess and Frozen lines from rival Mattel, which would transfer in January 2016. This deal followed on the heels of Hasbro's expanded agreement with Disney in July 2013 to bring its portfolio of Marvel and Star Wars characters into the fold, strengthening its toy offerings.

The Princess franchise had been licensed by Mattel since 1996. In recent years, however, the partnership between Disney and Mattel had soured, as Mattel focused on invigorating sales of its faltering Barbie franchise. In what may have been the catalyst for Disney's change, Mattel released its own princess-themed line of Barbie's, which competed directly with the Princess brand. Mattel estimated The Princess collection represented about $440 million of its 2015 revenue. 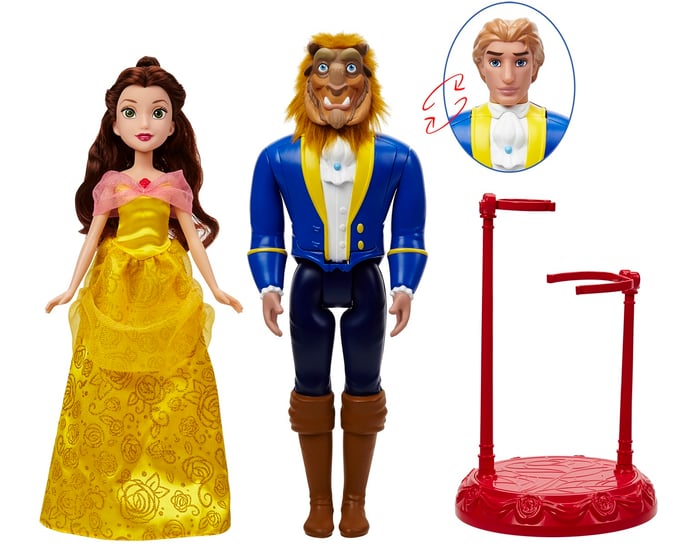 Fun in the sun

Hasbro has rebranded itself from a toy company to one "creating play experiences." Years earlier, a struggling Hasbro had dispatched a team of employees throughout the country to determine what toys children wanted. They found that the most sought after toys were those with a movie or TV connection, like its Transformers and G.I. Joe toys.

This insight led to numerous initiatives within the company. Hasbro co-produced the wildly popular Transformers movies beginning in 2007, which prompted the company to debut its own studio in 2009. Hasbro relocated some of its toy designers to the studio to ensure that screen characters could make the transition to popular toys.

It has since produced numerous movie adaptations of its most popular toys and games, including G.I. Joe, Battleship, and Ouija. Its upcoming My Little Pony is expected to be a fan favorite. While some movies did better than others, they brought attention to the company's toy brands.

The move to link its toys with movies was a prescient one. A recent report by analyst Michael Ng of Goldman Sachs indicates that toys with movie and TV connections represented 21% of toy sales, but accounted for 41% of growth from 2008 to 2015.

Every cloud has a silver lining

This strategy of focusing on storytelling with big and small screen tie-ins, combined with the leverage provided by the acquisition of licensing rights to Disney's Princess properties, has been a winning combination for Hasbro. Mattel isn't wallowing in defeat, however. It's releasing a new line of its iconic Barbie dolls featuring a variety of body types, skin tones, and eye colors in an effort to evolve and embody the diversity in the world and win back customers. Time will tell if this initiative will be successful.