InterDigital had big returns last year, and some investors might be tempted to try and jump in after the fact. Here are some points for investors to consider.

InterDigital (IDCC 1.48%) has had a monster year. In the last 12 months, its stock has more than doubled in value. Worried you missed the boat?

Even with shares pushing through to fresh highs, it's possible you haven't. Here's what happened in the last year and what the company has in the works. 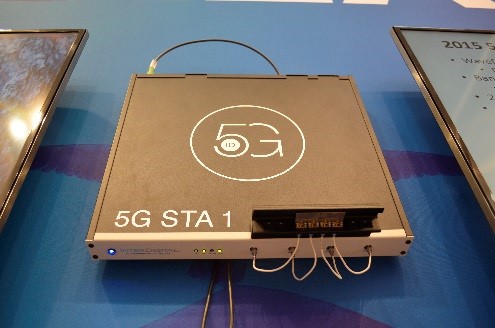 The past year in review

2016 got off to a rocky start for U.S. stocks overall, but it was off to the races for InterDigital. The company made it a goal this past year to make its revenue more consistent and to control tax and litigation expenses.

Efforts were successful on those fronts, with new multiyear deals with current licensee clients inked, year-over-year legal costs reduced, and a tax benefit from amending previous results getting added back. The result was strong revenue growth, with much of that increase getting funneled directly to the bottom line. 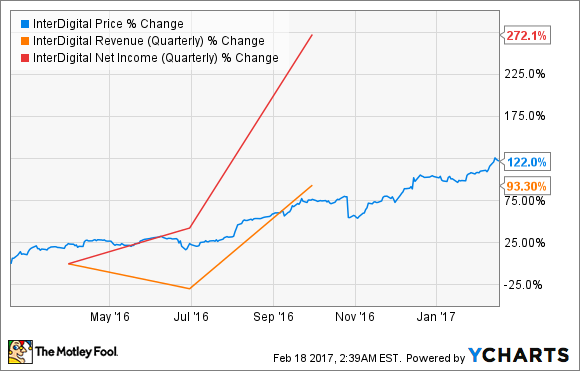 Here is a timeline of some of the big announcements in the last six months that led to the company's great year:

InterDigital gearing up for another round

The developer and licensor of new tech has received much benefit as of late from work it completed in years past, specifically around its patents on 3G and 4G wireless networks. While this has fueled growth up to this point, the company has had its engineers hard at work on Internet of Things (IoT) and next-generation mobile-network technologies.

The IoT movement has already begun as billions of connected devices, spanning from industrial sensors to consumer electronics, have been sold. However, the trend toward an increasingly connected world is just getting started, with some estimates saying the number of connected things will triple in the next few years. InterDigital was recognized several times last year for its work on technology governing things like connected vehicles and connection-enabling device-development platforms.

Though an increasing number of devices are getting hooked up to the internet, cracks in the foundation have been recognized, specifically around security issues, speed, and reliability of the current iterations of wireless technology like 4G. Enter the next generation in wireless capability, dubbed 5G, which is now being developed and tested for deployment to consumers within the next few years. InterDigital has been working to build solutions for the future network, technology it will be able to patent and license to clients in the future as the IoT movement spreads.

As technology evolves, demand for InterDigital's past work on things like 3G and 4G will eventually dwindle away, so its current work is important to ensure its long-term viability. After the past year's big jump, though, the forward price-to-earnings ratio based on next year's estimates is at 30, implying investors are quite confident in the company's ability to grow.

Are these expectations realistic?

The patent-licensing business can be volatile. While InterDigital was successful in signing several high-profile multi-year license agreements last year, history has shown that income from patent royalties and licenses can come in fits and starts. 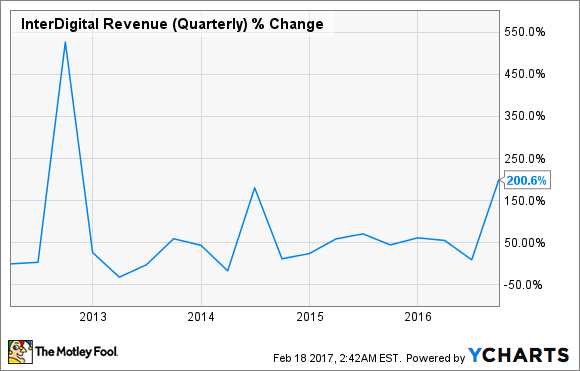 However, as the reach of the internet expands, and connected devices become a larger part of our everyday life, InterDigital stands to benefit. It has already found success in helping design the wireless networks and smartphones we use today, and the company is paving its own runway to profit off of the technology of tomorrow. This is also reflected in analyst expectations of nearly 30% earnings growth for the next five years as this next wave of tech starts to unfold.

After all the hype and positive PR from 2016, I'm personally holding off on making a purchase just yet. I plan on evaluating a purchase again when full-year 2016 financial results come out later this week.